Male Sirex noctilio Fabricius form leks in the upper canopy where mating occurs and have an orange abdominal segment not present in females. This study used field trapping studies in South Africa to examine the impact of stimuli (primarily visual) associated with male S. noctilio on the capture of conspecific females. Although we observed that traps baited with dead males (simulated leks) captured more females than unbaited traps, traps baited with a synthetic blend of host volatiles captured more female S. noctilio than traps baited with dead males. Additionally, dead males provided no additive effect on trap catch when combined with the host volatile lure regardless of the simulated lek size or if males were alive or dead. These results are the first to experimentally confirm an effect of a conspecific, and potentially mating related, visual stimulus on the behavior of S. noctilio. There, however, appears to be limited potential for improvement of existing S. noctilio trapping methods by the addition of male decoys as deployed in this study. 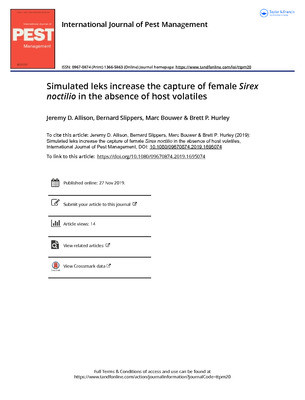