This report provides an updated national overview of how the public has been engaged in Forest Advisory Committees (FACs) in Canada. These committees operate across a wide range of geographic, social and political environments and the study highlights a number of important similarities and differences among the provinces and regions where FACs operate. A first national survey of FACs was conducted in 2004 and a new round of data collection took place, via surveys, from April to September 2016. The results presented in this report are those provided by chairs of advisory committees (n = 66) and the committee members (n = 343). More specifically, this study provides a basic profile of FACs and describes their activities; and participants’ views of representation, inclusiveness, and effectiveness, including whether members were satisfied with their participation and influence in forest policy and decision-making. Overall, the results from 2016 aligned closely with the results from the 2004 national survey. The number of FACs has declined, but their demographic composition remains relatively stable. Committee members are growing older, with an average age of 58; the representation of women and Indigenous peoples has not changed appreciably since 2004. Almost 75 percent of members reported feeling satisfied with their participation. However, the highest levels of dissatisfaction about group process and effectiveness were expressed by women and Indigenous participants. Thus, while FAC have, since their inception, had some success in engaging public stakeholders and rights holders, problems of representation and influence identified in 2004 endure. The study recommends additional measures to ensure Canada meets “society’s responsibility” for sustainable forest management.

Also available under the title:
Engaging the Public in Sustainable Forest Management in Canada: Results from a National Survey of Advisory Committees. Information Report LAU-X-142E. (English) 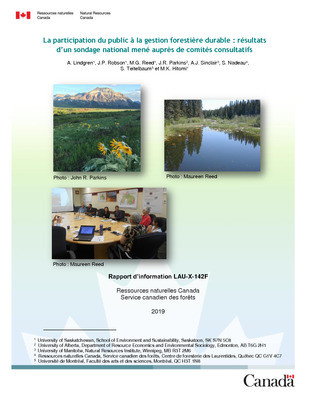