Climate changes are expected to progressively increase extreme wildfire frequency in forests. Finding past analogs for periods of extreme biomass burning would provide valuable insights regarding what the effects of warming might be for tree species distribution, ecosystem integrity, atmospheric greenhouse gas balance, and human safety. Here, we used a network of 42 lake-sediment charcoal records across a∼2000 km transect in eastern boreal North America to infer widespread periods of wildfire activity in association with past climate conditions.The reconstructed fluctuations in biomass burning are broadly consistent with variations in ethane concentration in Greenland polar ice cores.Biomass burning fluctuations also significantly co-varied with Greenland temperatures estimated from ice cores, at least for the past 6000 years.Our retrospective analysis of past fire activity allowed us to identify two fire periods centered around 4800 and 1100 BP, coinciding with large-scale warming in northern latitudes and having respectively affected an estimated ∼71% and ∼57% of the study area.These two periods co-occurred with widespread decreases in mean fire-return intervals.The two periods are likely the best analogs for what could be anticipated in terms of impacts of fire on ecosystem services provided by these forests in coming decades. 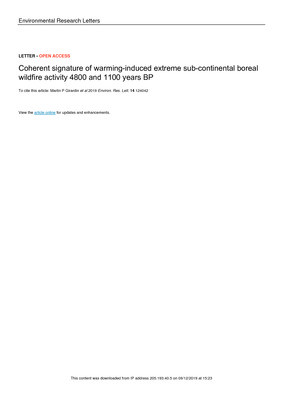