We developed an approach using sticky trap arrays as an early detection tool for populations of first-instar nymphs of the hemlock woolly adelgid (Adelges tsugae Annand), a pest of hemlocks (Tsuga spp. [Pinaceae]) in North America. We considered the detection rate of at least one nymph from trapping arrays consisting of one to six sticky panels, where we varied both the surface area of each trap that we assessed and the length of the trapping duration. We also estimated the time needed to set up, service, and assess groups of traps and attempted to relate capture of nymphs on traps to incidence and abundance of A. tsugae in the canopy above the traps. Arrays consisting of two traps provided a detection rate of 75% when 87.5% of the surface area of each trap was assessed, a process that required 38 min per array. The probability of detecting nymphs on traps left in the field for 5–6 d was similar to that for traps left for 12 d. The number of nymphs trapped in an array predicted the probability of finding A. tsugae in the canopy but only when all six traps were fully assessed. To reliably detect incipient A. tsugae infestations, we recommend placing arrays of traps at 1 km intervals along the perimeter of a stand during peak activity of first-instar sistentes nymphs and servicing these arrays every 5–7 d. 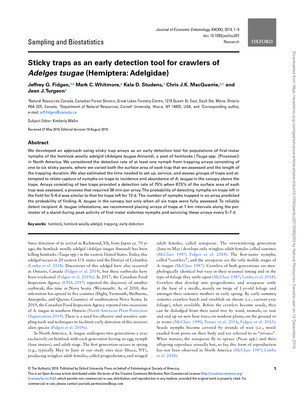