Competition and predation are important components of biotic resistance, which helps define the invasibility of an ecosystem. To search for evidence of biotic resistance to the European woodwasp, Sirex noctilio Fabricius, in North America, we used cages to experimentally exclude the community of associates (natural enemies and competitors) from infested logs. Specifically, we assessed S. noctilio brood production in pine forests in Ontario and New York, where there was a rich existing community of associates (other wood borers, bark beetles and associated fungi, and parasitoids), and in South Africa, where siricid wasps and pines are not native and a similar associate community is not present. In addition, in Ontario, we excluded associates by size, and for different periods of time to identify important associates and their temporal dynamics. We found evidence that biotic factors limit S. noctilio in North America, whereby exclusion of natural enemies and competitors had a positive influence on the size or presence of S. noctilio brood in Ontario and New York. This influence was absent in South Africa. It is unclear which member(s) of the associated insect community in North America were most important in limiting S. noctilio brood production, though they likely acted quickly (<two weeks) following S. noctilio oviposition. Further study is needed to determine whether associates have limited S. noctilio populations in pine forests throughout northeastern North America, and which specific natural enemies and/or competitors are important. 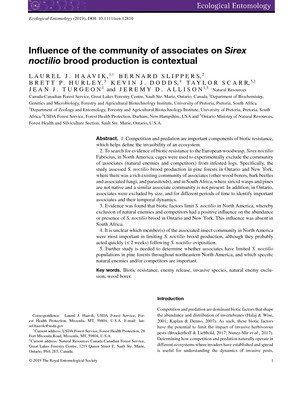