Spruce budworm (SBW) outbreaks are a major natural disturbance in boreal forests of eastern North America. During large-scale infestations, aerial spraying of bacterial insecticides is used to suppress local high-density SBW populations. While the primary goal of spraying is the protection of wood volume for later harvest, it should also maintain carbon stored in trees. This study provides the first quantitative analysis of the efficacy of aerial spraying against SBW on carbon dynamics in balsam fir, spruce, and mixed fir–spruce forests. In this study, we used the TRIPLEX-Insect model to simulate carbon dynamics with and without spray applications in 14 sites of the boreal forest located in various regions of Québec. We found that the efficacy of aerial spraying on reducing annual defoliation was greater in the early stage (<5 yr since the outbreak began) of the outbreak than in later (5–10 yr since the outbreak began) stage. Our results showed that more net ecosystem productivity is maintained in balsam fir (the most vulnerable species) than in either spruce or mixed fir–spruce forests following spraying. Also, average losses in aboveground biomass due to the SBW following spraying occurred more slowly than without spraying in balsam fir forests. Our findings suggest that aerial spraying could be used to maintain carbon in conifer forests during SBW disturbances, but that the efficacy of spray programs is affected by host species and stage of the SBW outbreak. 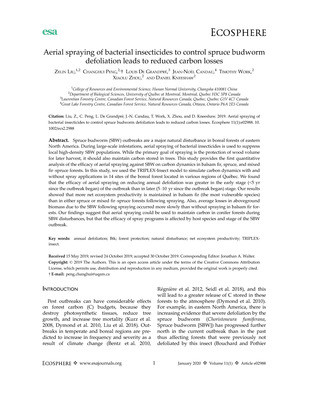