Knowledge of forest stand successional pathways, and responses to disturbances, is crucial for improved sustainable management of the resource. Forest structure, one attribute of which is the size and height distribution of trees in a stand (known as the stem size distribution; SSD), is highly sensitive to changes in stand dynamics. However, monitoring changes in SSD can be difficult and costly, especially across large spatial extents and by different disturbance types and species groups. As a result, forest managers increasingly utilise three-dimensional remote sensing such as airborne laser scanning (ALS) as a means of modeling forest structure in a costeffective and spatially consistent manner. In this study, approximately 7000 ALS-derived SSDs representing a chronosequence of over 50 years of forest disturbance in Alberta, Canada were used to evaluate differences in structural development by species groups and disturbance types. Stands were clustered into three structural development phases based on ALS-derived SSDs. Results showed no difference in SSDs for early development phases, but significantly higher proportions of trees in medium-sized diameter classes (up to 25 cm diameter at breast height) in previously burned stands than in previously harvested stands. For each structural development phase, in both burned and harvested stands, there was no significant difference in modeled SSD among species groups. No difference in SSD for each phase was also seen when comparing previously burned to harvested stands for mixed species and white spruce stands. However, aspen and pine-dominated stands had significantly higher proportions of larger trees in burned stands than harvested stands in the second and third phase of structural development. Results from this study provide valuable insights to the current state of the forest, as well as an improved understanding of the general patterns of structural development following disturbance.

Objective: This manuscript explores the potential of airborne laser scanning (ALS) derived stem size distributions to serve as indicators of forest structural phases following stand-replacing disturbances in mixedwood boreal forests of central Alberta. Key findings: Tree size distributions can be used to describe forest structural development; each disturbance type resulted in stands whose structure did not differ by species; burned aspen and pine stands had more large trees in later stages of development; mixed species and white spruce stands had no difference for each development phase. Why is this study important: This study integrates disturbance history from Landsat time series data with detailed characterizations of forest structure derived from ALS data to examine how post-disturbance stand development varies by disturbance type and dominant tree species. 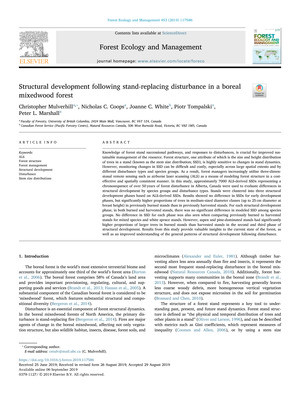