In Canada, recent catastrophic wildfire events raised concern from governments and communities. As climate change is expected to increase fire activity in boreal forests, the need for a better understanding of fire regimes is becoming urgent. This study addresses the 1972–2015 spatial distributions of fire cycles, mean fire size (FireSz) and mean fire occurrence (mean annual number of fires per 100 000 ha, FireOcc) in eastern Canada. The objectives were to determine (1) the spatial variability of fire-regime attributes, (2) the capacity of FireSz and FireOcc to distinguish homogeneous fire zones and (3) the environmental factors driving FireSz and FireOcc, with some emphasis on lightning strikes. Fire cycles, FireSz and FireOcc greatly varied throughout the study area. Even within homogeneous fire zones, FireSz and FireOcc were highly variable. FireSz was controlled by moisture content in deep layers of the soil and by surficial deposits, whereas FireOcc was controlled by moisture content in top layers of the soil and by relief. The lack of a relationship between FireOcc and lightning-strike density suggested that the limiting effect of lightning-strike density on FireOcc could be operating only under certain circumstances, when interacting with other environmental factors. 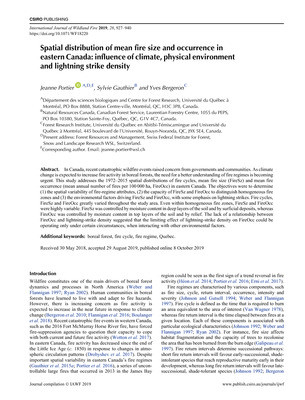