The spruce budworm, Choristoneura fumiferana, is presumed to be panmictic across vast regions of North America. We examined the extent of panmixia by genotyping 3,650 single nucleotide polymorphism (SNP) loci in 1975 individuals from 128 collections across the continent. We found three spatially structured subpopulations: Western (Alaska, Yukon), Central (southeastern Yukon to the Manitoba–Ontario border), and Eastern (Manitoba–Ontario border to the Atlantic). Additionally, the most diagnostic genetic differentiation between the Central and Eastern subpopulations was chromosomally restricted to a single block of SNPs that may constitute an island of differentiation within the species. Geographic differentiation in the spruce budworm parallels that of its principal larval host, white spruce (Picea glauca), providing evidence that spruce budworm and spruce trees survived in the Beringian refugium through the Last Glacial Maximum and that at least two isolated spruce budworm populations diverged with spruce/fir south of the ice sheets. Gene flow in the spruce budworm may also be affected by mountains in western North America, habitat isolation in West Virginia, regional adaptations, factors related to dispersal, and proximity of other species in the spruce budworm species complex. The central and eastern geographic regions contain individuals that assign to Eastern and Central subpopulations, respectively, indicating that these barriers are not complete. Our discovery of previously undetected geographic and genomic structure in the spruce budworm suggests that further population modelling of this ecologically important insect should consider regional differentiation, potentially co-adapted blocks of genes, and gene flow between subpopulations. 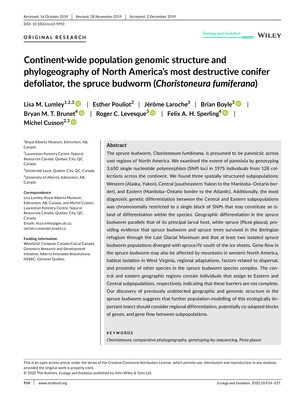