Emerald ash borer (EAB), Agrilus planipennis Fairmaire, is an invasive and destructive beetle that causes extensive damage to ash trees in North America. The entomopathogenic fungus Beauveria bassiana Vuillemin is considered as an effective biological control agent for EAB adult populations. Using an autodissemination device with a fungal isolate of B. bassiana, our research aims to investigate the possibility of horizontal transmission of the fungal disease from infected to uninfected EAB adults during mating. Results show that the efficiency of fungal transmission is significantly related to the sex of EAB carrying the fungal pathogen. EAB males are the promising vector to transmit mycosis to their partners during mating. Results strengthen the potential of the fungal autodissemination device as a powerful biological strategy to control EAB populations. 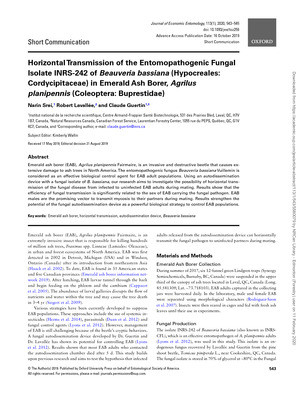