The Atlantic-Gaspesie caribou (Rangifer tarandus caribou) is an endangered, isolated population that has been declining for decades in response to intensive logging. Timber harvesting has led to a significant increase in moose (Alces americanus) densities and has triggered numerical and functional predator responses. Moose are now frequently observed at higher altitudes in preferential caribou habitat. Despite extensive range overlap between these two species across Canada, few studies have precisely assessed the potential role of exploitative competition. We assessed the potential overlap between their diets during summer, a key period for energy and nutrient acquisition in cervids. We collected faeces from both species along an altitudinal gradient (200 m-1250 m asl) and used plant chloroplast barcoding sequence trnL to reconstruct diet at the species level. Plant species composition differed between caribou and moose samples, with cervid species explaining 40% of the variation in dissimilarity. We noted slight variations in dissimilarity between species between months and along an altitudinal gradient. Some species that are almost exclusively eaten by moose (speckled alder, wild redcurrant) or by caribou (common juniper, common horsetail) contributed the most to the dissimilarity between diets. The potential for food competition appears relatively low, even at increased moose densities, possibly as a result of past competition. This separation in food niche could also be explained by an imperfect segregation of species since the proportion of time spent in different strata of altitude is unequal. High moose densities thus appear to be more harmful to caribou due to shared predators, but a low level of competition for a few food items could contribute to the decline of this endangered population if some caribou are nutritionally stressed. 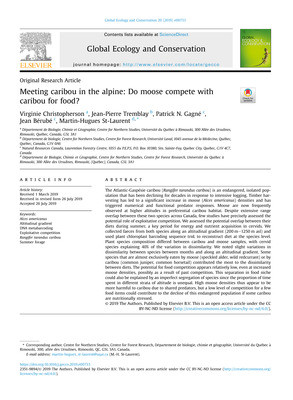