For regulatory purposes, the name ‘Asian gypsy moth’ refers to a group of closely related Asian Lymantria species and subspecies whose female moths display flight capability, a trait believed to confer enhanced invasiveness relative to the European gypsy moth, Lymantria dispar dispar, whose females are flightless. Lymantria albescens and Lymantria postalba are Asian gypsy moths occurring in the southern Ryukyu Islands and in the northern Ryukyu and adjacent Kyushu and Shikoku Islands of Japan, respectively. Although once considered subspecies of L. dispar, their status as distinct species, relative to the latter, is now well established. While postalba was subsequently considered a subspecies of L. albescens, largely on the basis of differences in forewing ground colour in males, both taxa were later given distinct species status by Pogue & Schaefer (2007) following their revision of the genus Lymantria. Here, we re-examined the validity of this revised status through the sequencing of a large portion of the mitochondrial genome (c. 60%) and multiple nuclear marker genes [elongation factor 1-alpha (Ef-1

Asian gypsy moths (AGM) pose a very significant threat to North American forest resources. Not only do their foliage-feeding larvae have a very broad host range, their adult females are flight-capable, a trait that could favor their rapid spread should they become established on our continent. In comparison, females of the European gypsy moth (EGM), an insect that is already present in North America, are flightless and have a narrower host range. The AGM designation refers to a complex of closely related gypsy moth species and subspecies that are difficult to distinguish from one another and from the EGM, particularly at the egg stage. For this reason, molecular tools were recently developed by our group to help correctly identify gypsy moth egg masses intercepted during marine vessel inspections in Canadian ports. Based on molecular data, we recently called into question the distinct species status previously given to two AGM types found in the Japanese Ryukyu islands, Lymantria albescens and L. postlaba. For the present work, we used five different molecular markers to help determine whether these two moth types are actually genetically different. As results indicate they are not, we propose they represent a single species that should be named L. albescens. The present findings will reduce ambiguity within one of the modules of our AGM molecular identification tool. 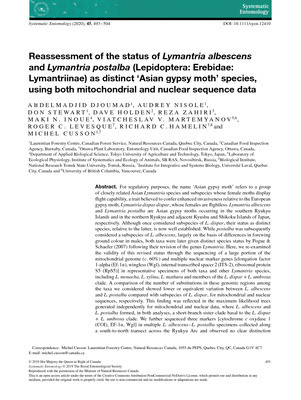