Insects respond to environmental conditions with a variety of developmental responses which include changing developmental rates, or suppressing development altogether in quiescence or diapause. Such responses have important implications for survival and voltinism. The spruce beetle, Dendroctonus rufipennis Kirby (Coleoptera: Curculionidae), has long been assumed to have an obligatory adult diapause based on field observations that adults always overwinter prior to dispersing and reproducing; however, it has never been experimentally demonstrated and recent evidence suggests that adults in some populations may exhibit facultative tendencies. We examined the emergence of adults at a constant 22°C after exposure to 2°C for 0 (no cold), 25, 50, and 75 d. Our observations of a delayed and extremely protracted emergence period in the absence of a substantive cold period, which could last several months, in combination with rapid, synchronous mass emergence after a substantive cold period, are most consistent with an obligate diapause. Approximately 50% of individuals could complete diapause in 55 d at 2°C, and 75 d of cold was adequate for almost all individuals to complete diapause. Beetles that emerged slowly over time may still have been in diapause; however, additional research would be required to test this hypothesis. Conditions throughout the beetle’s range in Canada should facilitate successful completion of diapause. An obligate adult diapause for spruce beetle populations in western Canada would limit the shortest possible life cycle to 1 yr, but would also serve to maintain an adaptive 1-yr life cycle, especially under a changing climate. 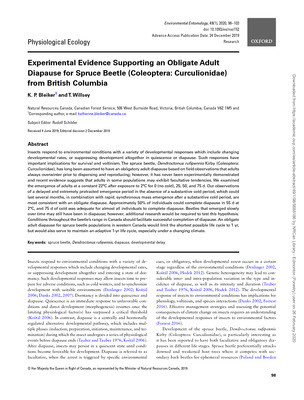