Studies have demonstrated that semiochemical-baited intercept traps differ in their performance for sampling insects, but we have an incomplete understanding of how and why intercept trap design effects vary among insects. This can significantly delay both the development of new and optimization of existing survey and detection tools. The development of a mechanistic understanding of why trap performance varies within and among species would mitigate this delay. The primary objective of this study was to develop methods to characterize and compare the odor plumes associated with intercept traps that differ in their performance for forest Coleoptera. We released CO2 and measured fluctuations of this tracer gas from 175-point locations arranged in a 2 by 3 by 2 meter grid cuboid downwind of a standard multiple-funnel, a modified multiple-funnel, a panel, a canopy malaise trap, and a blank control (i.e., no trap) in a greenhouse. Significant differences in trapping efficacy between these different trap designs were observed for Monochamus scutellatus (Say) and Monochamus notatus (Drury) in a field trial. Significant differences were also observed in how CO2 accumulated in time at different positions downwind among these different trap designs. Turbulent diffusion is the dominant force structuring odor plumes and creates intermittency in the odor plume that is important for sustained upwind flight in insects. Although we observed differences in the odor plumes emanating downwind of the different intercept trap designs, we were unable to reconcile these differences with capture rates of the different trap designs for M. scutellatus and M. notatus. 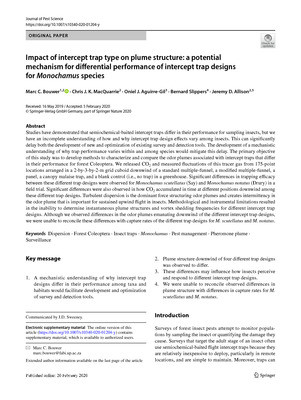