Spatial distribution of plants in early successional stands provides an indication of future plant community structure and population dynamics. Determining the factors driving plant interactions and their demographic relationships at stand initiation is critical to gain a better understanding of plants’ responses to competition and limited resource conditions. Reclaimed ecosystems are ideal for studying such community mechanisms because they are completely reconstructed ecosystems with known community filters such as soil type, propagule composition, and the presence of both planted and naturally establishing trees. The current study explored the spatial patterns and competition-facilitation mechanisms in deciduous and evergreen trees in two oil sands reclaimed sites with different reclamation age (2-year old and 5-year old) and cover soils (wetland peat origin – PMM; and forest floor origin – FFMM) in Alberta, Canada, and compared this with a naturally-disturbed site at 5 years since fire. Spatial point pattern analysis was performed using pair correlation function g(r), mark correlation function kmm(r), and bivariate g-function. Intraspecific competition in deciduous seedlings was stronger in the 5-year old reclaimed site than in the 2-year old site. Spatial patterns in deciduous seedlings on PMM were aggregated at 1–3 m scale similar to the natural site, whereas seedlings on FFMM sites had aggregated patterns at greater than 5 m scale. Planted conifers had regular pattern at 1–2 m scale in the 2-year old sites which reflects the plantation spacing, but showed a random pattern in the 5-year old sites indicating the effect of random mortality. Bivariate spatial analysis indicated a significant repulsion between deciduous and coniferous seedling at 1 m in the 2-year old PMM site and a significant attraction in the 5-year old FFMM site suggesting that the mechanism of competition-facilitation between trees is different in different cover soils. Density dependent thinning was only observed in the 2-year old PMM and natural sites; however, a gradual increase in nearest neighbour distances with increasing seedling size in all the reclaimed sites suggests that density dependent thinning has started.

The spatial distribution of trees is a good indicator of how trees are competing with neighbouring plants for sunlight, moisture, and nutrients. In young, reclaimed forests, competition may indicate how successful the reclamation effort has been. We studied the spatial patterns of deciduous and coniferous trees on different sites in northern Alberta that had been reclaimed after oil sands mining and compared them with those on a benchmark site that had been disturbed naturally (by forest fire). Competition was stronger in 5-year old than in 2-year-old reclamation sites. We also found evidence on different reclamation soil types that seedlings were competing with each other in some instances and enhancing each other’s growth and reproduction in others. Overall, when tree densities were high enough in reclaimed areas, the spatial distribution of the trees was very similar to that in the natural benchmark area, indicating that ecological processes were operating similarly in the reclaimed and natural areas. 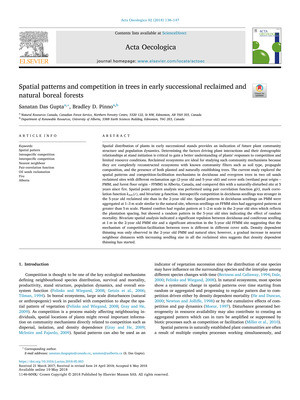