Climate change will drive significant changes in vegetation cover and also impact efforts to restore ecosystems that have been disturbed by human activities. Bitumen mining in the Alberta oil sands region of western Canada requires reclamation to “equivalent land capability,” implying establishment of vegetation similar to undisturbed boreal ecosystems. However, there is consensus that this region will be exposed to relatively severe climate warming, causing increased occurrence of drought and wildfire, which threaten the persistence of both natural and reclaimed ecosystems. We used a landscape model, LANDIS‐II, to simulate plant responses to climate change and disturbances, forecasting changes to boreal forests within the oil sands region. Under the most severe climate forcing scenarios (representative concentration pathway [RCP] 8.5) the model projected substantial decreases in forest biomass, with the future forest being dominated by drought‐ and fire‐tolerant species characteristic of parkland or prairie ecosystems. In contrast, less extreme climate forcing scenarios (RCPs 2.6 and 4.5) had relatively minor effects on forest composition and biomass with boreal conifers continuing to dominate the landscape. If the climate continues to change along a trajectory similar to those simulated by climate models for the RCP 8.5 forcing scenario, current reclamation goals to reestablish spruce‐dominated boreal forest will likely be difficult to achieve. Results from scenario modeling studies such as ours, and continued monitoring of change in the boreal forest, will help inform reclamation practices, which could include establishment of species better adapted to warmer and drier conditions. 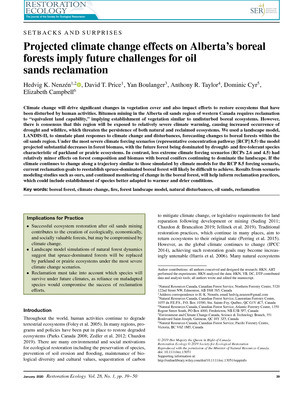