In northern boreal ecosystems, paludification is defined as the accumulation of partially decomposed organic matter over saturated mineral soils, a process that reduces tree regeneration and forest growth. Given this negative effect on forest productivity, spatial prediction of paludification in black spruce stands is important in forest management. Here, we used the Random Forest approach to predict organic layer thickness (OLT) as a proxy of paludification in northeastern Canada, where forests tend to paludify naturally. The RF approach involved regression and classification models using a suite of 20 environmental predictors derived from multiple sources. The performance of each model was evaluated using cross-validation and an independent dataset based on conventional ecological survey maps from a provincial forest inventory. Importance measures of the predictors indicated that slope, topographic position index, spectral bands 4 and 5 from Landsat, latitude, and PALSAR_HH were the most important variables explaining the spatial distribution of OLT for both models. Cross-validated relative root mean square error (± standard deviation) for the regression model was estimated at 20.66% ± 0.576, with R2 of 0.41 ± 0.020, whereas the average out-of-bag error for the classification model was estimated at 44.75%. However, both models performed better in predicting high risk of paludification (OLT values >40 cm). With predicted OLT values averaging 44.07 ± 16.80 cm (range 4.25–104.58 cm), the spatial patterns were in accordance with the results of previous studies at the national and landscape scale. These results highlight that ecological types such as black spruce–sphagnum on thin-to-thick organic deposit, with ombrotrophic drainage, are particularly prone to paludification (OLT depth > 40 cm) throughout the study area. Limitations of the models and applications for decision-making in forest management are discussed.

In northern boreal ecosystems, partially decomposed organic matter accumulates on top of saturated mineral soils. This process is called paludification, and it reduces tree regeneration and forest growth. Given this negative effect on forest productivity, identifying where paludification is likely to occur in black spruce stands is important in forest management. We used a computer program to predict the thickness of the organic layer, and these predictions were used to represent the partially decomposed organic matter layered over the saturated mineral soils in northeast Canada (where forests tend to paludify naturally).We evaluated model performance using data from conventional ecological survey maps from a provincial forest inventory. Slope, topography, satellite images, latitude, and radar were the most important factors used to explain variations in the location and thickness of the organic layer. The mean predicted value of the thickness of the organic layer (44.07 cm) agreed with values in previous studies at the national and regional scale. We discuss limitations of the models and applications for decision-making in forest management. 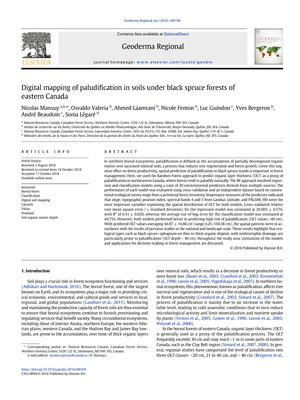