Afforestation can result in significant accumulations of carbon (C) in both soils and vegetation, which can make an important contribution to GHG emission mitigation. However, there remains a critical knowledge gap about ecosystem C stocks and fluxes at afforested sites, which is required in order to understand the effect of management choices like species selection and initial planting density. A hybrid biometric modelling approach was used to reconstruct ecosystem C stocks and fluxes at an experimental spacing trial consisting of three species (red pine, white spruce, and black spruce) planted at three densities, 63 years after it was established on former agricultural land in Northwestern Ontario, Canada. Wood volume and increment were larger for closer spacing and for red pine relative to black or white spruce, and translated to analogous differences in estimates of ecosystem C dynamics. At young ages, net ecosystem production was largest at close spacing, but this difference attenuated over time and was similar in recent decades regardless of initial spacing. Estimated carbon stock and flux values were generally congruent with available estimates from independent studies at analogous sites, with the exception of litterfall which showed greater differences. Plots at the site were estimated to be C sinks on an annual basis immediately after establishment under the assumption that the site was previously under long-term agricultural land use, but anywhere from 10 to 20 years following establishment if the site was modelled as if it was a stand in the managed forest historically subject to natural disturbance regimes.

Efforts to reestablish forests on marginal agricultural land have been ongoing in Ontario since the early 20th century. These efforts have typically consisted of planting a single species at regularly spaced intervals.This approach produces tree plantations that lack the diversity of natural forests, but these plantations can still help to mitigate greenhouse gas emissions because they store carbon in their live vegetation, in the deadwood and other dead organic materials on the ground, and in their soils. In this study, a model was created to analyze the changes in carbon storage over time at an experimental site near Thunder Bay, Ontario, that had been established on former agricultural land 63 years earlier. The site had three tree species (red pine, white spruce, and black spruce) planted at three different spacings. The accumulation of wood volume was highest in red pine and lowest in black spruce. In the early years after planting, carbon accumulation was greatest at the closest spacing, but the difference between spacings decreased over time. The results of this study advance our understanding of the effect of management choices like tree species selection and initial planting density. 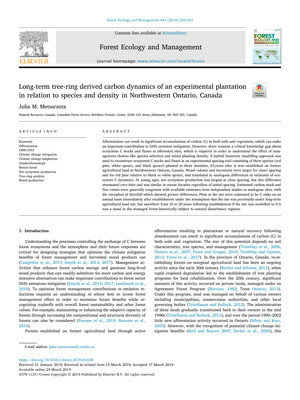