Because they generate more wood per area and time, short rotation plantations are likely to play an increasing role in meeting the global increase in the demand for wood fiber. To be successful, high-yield plantations require costly intensive silviculture regimes to ensure the survival and maximize yields. While hybrid poplar (Populus spp.) is frequently used in intensive, short rotation forestry, it is particularly sensitive to competition and resource levels. Mechanical site preparation is thus of great importance to create microsites that provide sufficient light levels and adequate soil water and nutrient availability. We conducted an experiment in Québec (Canada) to compare two intensive site preparation treatments commonly used to establish hybrid poplar. We compared the effects of double-blade site preparation (V-blade), mounding and a control on hybrid poplar growth and nutritional status four growing seasons after planting on recently harvested forested sites. We also evaluated the effects of site preparation and planted poplar on inorganic soil N. Our results confirmed general positive effects of site preparation on the early growth of hybrid poplar clones. After four growing seasons, survival was higher in the mounding treatment (99%) than in the V-blade (91%) and the control (48%). Saplings planted in the V-blade and in the mounding treatments had mean diameters that were respectively 91% and 155% larger than saplings planted in the control plots. Saplings were 68% taller in the mounding treatment than the control plots, but differences between the V-blade and controls were not significant. We did not detect significant effects of site preparation or the presence of planted hybrid poplar on soil inorganic N. Sapling foliar nutrient concentrations were not influenced by the site preparation treatments. Based on these results, mounding appears to be a good management approach to establish hybrid poplar plantations under the ecological conditions we have studied, as it is less likely to cause erosion because of the localized nature of the treatment. However, these environmental benefits need to be balanced against economic and social considerations. 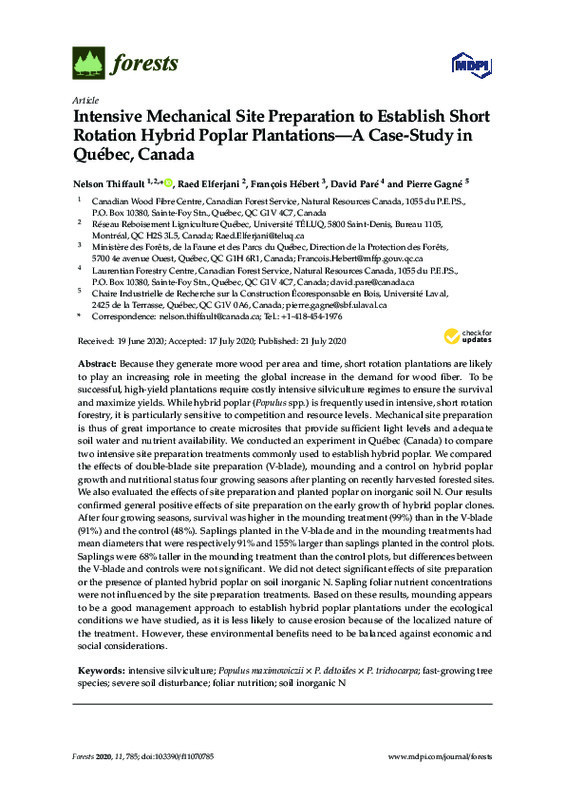