The increase in open-crown forest stands in the closedcrown boreal forest of Quebec over the last 50 years prompts us to identify and understand the drivers responsible for stand opening. To do so, we studied 37 jack pine plots with varying degrees of canopy opening in the Eastern Canadian boreal forest to answer four questions: (1) Does stand opening result from a deficit in pine regeneration, from poor tree growth, or from both processes simultaneously? (2) In the event that pine stand opening results at least in part from poor tree growth, how early following stand initiation does the tree growth divergence occur between unproductive and productive plots? (3) Is poor tree growth in the unproductive plots related to water stress? Finally, (4) are there predisposing site factors and, if so, what are their contributions versus non-permanent factors such as disturbance history, vegetation, and soil dynamics? In the study area, jack pine stand openings resulted from both a poor regeneration density and weak tree growth. Tree growth divergence between productive and unproductive plots occurred very early during the post-disturbance forest succession and is not likely to result from water limitation during the early development of the trees as revealed by d13C analysis of tree rings. Low-productivity plots were exclusively found on substrates with low base cation reserves. However, because plots of higher productivity were also found on these substrates, we conclude that stand susceptibility to regeneration failures may be greater on sites with such conditions. Variations in tree cover were mainly related to non-permanent environmental variables, suggesting that restoration of forest productivity is theoretically possible in the lowproductivity sites investigated. 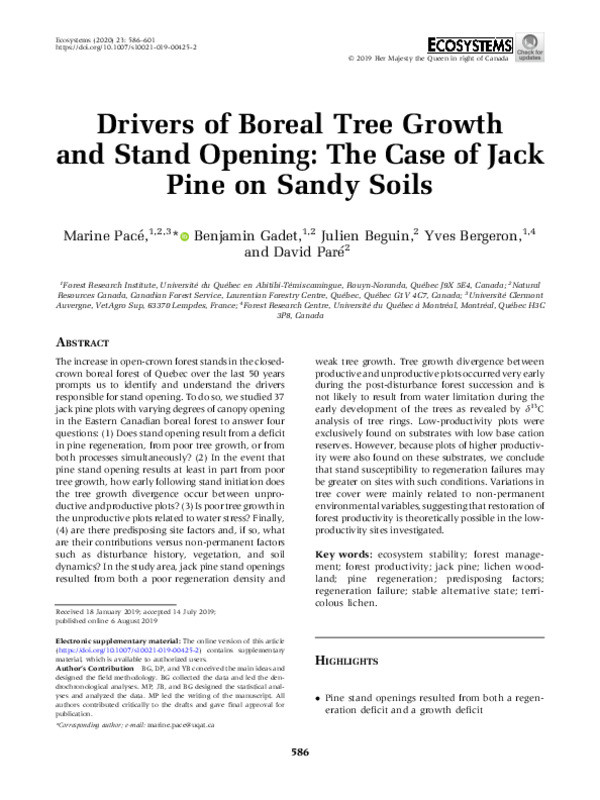