The Emerald Ash Borer (EAB) was likely introduced to North America in the early 1990s and has since become a highly destructive invasive forest pest. From 2002 onwards, federal quarantines have regulated the movement of at-risk ash commodities in both Canada and the United States (U.S.). Despite these regulations, the EAB has spread rapidly from Michigan and southern Ontario to much of eastern North America, leaving millions of dead ash trees in its wake. As of 2019, the EAB was present in 36 states in the U.S. and 5 Canadian provinces, including Manitoba, Ontario, Québec, New Brunswick and Nova Scotia. The U.S. recently evaluated the effects of removing domestic EAB quarantine regulations. In this context, our study examined the costs and benefits of EAB regulations in Canada. We estimated the cost of EAB regulation by combining applicable Canadian Food Inspection Agency (CFIA) administrative costs and program compliance costs faced by participating wood product mills. The benefits of regulation were determined as the value of slowing its spread by delaying damage to high-valued street ash trees in communities and to rural trees. The model focused on the economic costs associated with the EAB and did not include an estimate of the environmental and social impacts of EAB regulation. An analysis of these non-monetary values would complement the current study and could be explored in future research but was not required to justify the regulatory efforts on allocative efficiency grounds. We assessed the economic costs and benefits of EAB regulation by simulating differences in expected damage with and without quarantine regulations in place. The actual effectiveness of regulation was uncertain and difficult to quantify. We therefore explored a wide range of possible effectiveness levels to ensure that we captured the true level of regulation effectiveness. We did not comment on the effectiveness of current (and past) EAB regulations since this was beyond the scope of our analysis. Estimated annual regulatory management costs to the CFIA were approximately $441,634, while estimated annual regulatory costs to industry varied between $0.39 million and $2.37 million. Street and rural tree damage cost estimates due to the EAB ranged from $1,422 million under a no regulation simulation to $1,170 million under a regulation with 95% effectiveness over this period. Results suggest if regulatory measures have even a 10% effect in slowing EAB spread to places not already affected, then the effort could be economically efficient, although the regulations as modeled did not stop EAB movement. It follows that the value of delayed damage of ash street trees and rural ash alone is large enough in most cases to justify continuing EAB regulation.

The purpose of this study, commissioned by the Canadian Food Inspection Agency, was to evaluate the net benefits of current quarantine regulations in place to slow the spread of the Emerald Ash Borer (EAB), invasive alien pest that is lethal to ash trees, from central Canada to other regions. The study first estimated what the cost of regulations are on both the regulatory agency (CFIA) and industry that uses ash trees. Next, the study estimated avoided damages (or benefits) by modeling the spread and damages of the EAB with and without regulations in place. A broad range of scenarios was considered due to the high uncertainty with regard to the effectiveness of regulation slowing the spread of the EAB. The findings of the study suggest that current regulations likely are beneficial, even under the most pessimistic effectiveness scenario considered. This study’s results will help inform CFIA officials’ deliberations regarding if it is in Canada’s interests to maintain current regulations, especially in light of possible US deregulation in the near future. 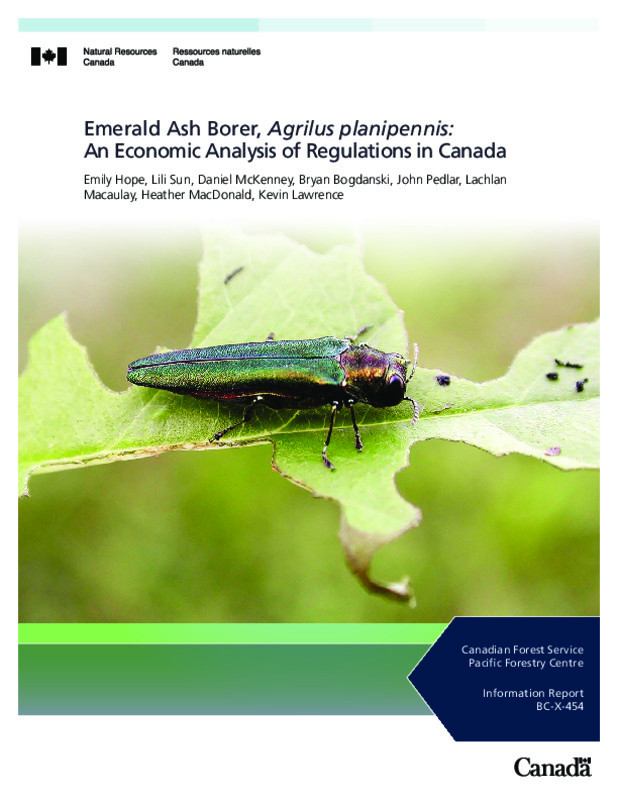