Forest fires are a key driver of boreal landscape dynamics and are expected to increase with climate change in the coming decades. A profound understanding of the effects of fire upon boreal forest dynamics is thus critically needed for our ability to manage these ecosystems and conserve their services. In the present study, we investigate the long-term post-fire forest dynamics in the southern boreal forests of western Quebec using historical aerial photographs from the 1930s, alongside with modern aerial photographs from the 1990s. We quantify the changes in forest cover classes (i.e., conifers, mixed and broadleaved) for 16 study sites that were burned between 1940 and 1970. We then analyzed how interactions between pre-fire forest composition, site characteristics and a fire severity weather index (FSWI) affected the probability of changes in forest cover. In the 1930s, half of the cover of sampled sites were coniferous while the other half were broadleaved or mixed. Between the 1930s and the 1990s, 41% of the areas maintained their initial cover while 59% changed. The lowest probability of changes was found with initial coniferous cover and well drained till deposits. Moreover, an important proportion of 1930s broadleaved/mixed cover transitioned to conifers in the 1990s, which was mainly associated with high FSWI and well-drained deposits. Overall, our results highlight a relatively high resistance and resilience of southern boreal coniferous forests to fire, which suggest that future increase in fire frequency may not necessarily result in a drastic loss of conifers 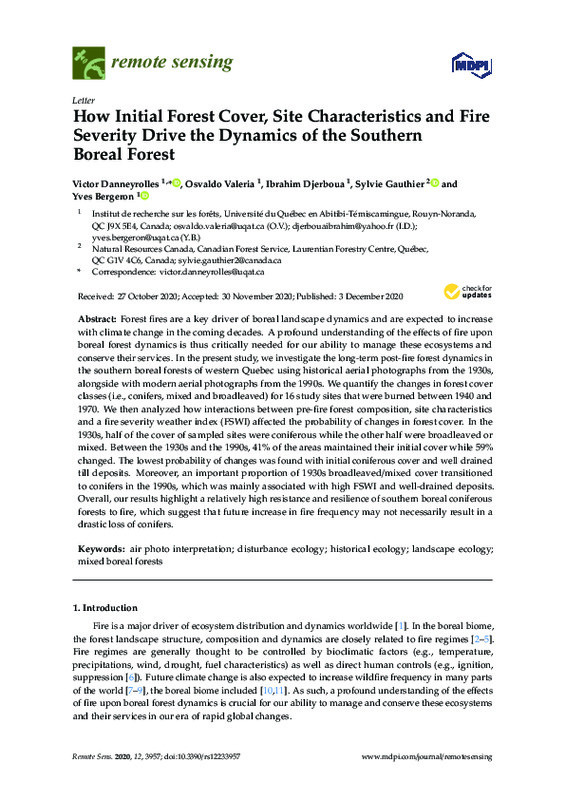