The boreal forest in Canada comprises a wide variety of ecosystems, including stabilized (overgrown) sand dunes, often referred to as sand hills. Globally, sandy soils are known for supporting a high diversity of invertebrates, including ants, but little is known for boreal systems. We used pitfall trap sampling in sand hill, aspen parkland and peatland ecosystems to compare their ant diversity and test the prediction that areas with sandy soils have higher invertebrate diversity compared to more mesic/organic soils. Overall, sand hills had ~45% more ant species compared to other sampled ecosystems from Alberta. Similar to other studies, local canopy cover within sand hills was found to be inversely related to ant species richness and diversity. Although sand hills are rare across the region, they are high biodiversity areas for ants, with the sand hills of north-central Alberta having higher species richness of ants compared to other studied areas in Canada.

The boreal forest in Canada is made up of many different ecosystems, including overgrown sand dunes, often called sand hills. Globally, sandy soils support high diversity of ants and other invertebrates (species without a backbone), but not much is known in boreal systems. We collected ants in boreal upland and lowland forests, and in sand hills of Alberta to compare their diversity. We predicted that areas with sandy soils would have higher ant diversity compared to moister, organic soils. Sand hills had ~45% more ant species than other ecosystems. Sand hills are rare across the region, but high diversity areas for ants. The sand hills of north-central Alberta had more species of ants than other studied areas across Canada. 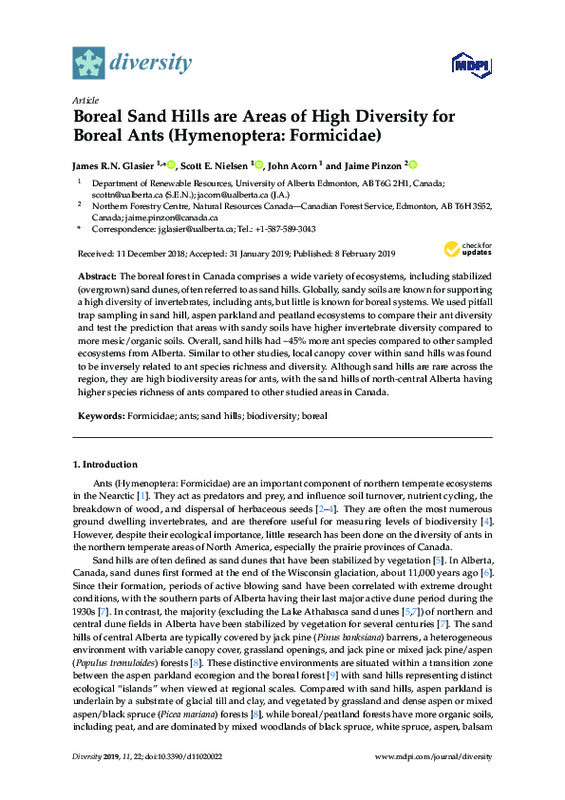