Human activities threaten the effectiveness of protected areas (PAs) in achieving their conservation goals across the globe. In this study, we contrast the influence of human and macro-environmental factors driving fire activity inside and outside PAs. Using area burned between 1984 and 2014 for 11 ecoregions in Canada and the United States, we built and compared statistical models of fire likelihood using the MaxEnt software and a set of 11 key anthropogenic, climatic, and physical variables. Overall, the full model (i.e. including all variables) performed better (adjusted area under the curve ranging from 0.71 to 0.95 for individual ecoregions) than the model that excluded anthropogenic variables. Both model types (with and without anthropogenic variables) generally performed better inside than outside the PAs. Climatic variables were usually of foremost importance in explaining fire activity inside and outside PAs, with anthropogenic variables being the second most important predictors, even inside PAs. While the individual contributions of anthropogenic variables indicate that fire activity decreased as of function of increasing human footprint, the anthropogenic effects were often substantially greater than those of physical features and were comparable to or even greater than climatic effects in some densely developed ecoregions, both outside and within PAs (e.g. Mediterranean California, Eastern Temperate Forest, and Tropical Wet Forests). Together, these results show the pervasive impact of humans on fire regimes inside PAs, as well as outside PAs. Given the increasing attractiveness of PAs, the implications for adaptive fire management beyond the concept of naturalness in the PAs are discussed. Our assessment of human-altered fire activity could serve as an indicator of human pressure in PAs; however, we suggest that further analysis is needed to understand specific interactions among fire, human pressures, and the environmental conditions at the scale of PAs. 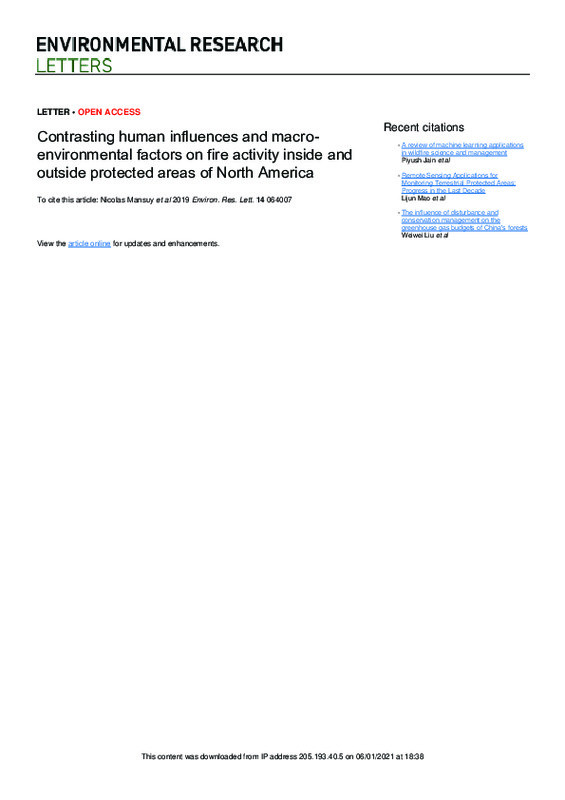