Parasitoids can affect host population dynamics with community-level consequences. In the Arctic, a high diversity of parasitoids relative to potential hosts suggests that parasitoids may exert strong selection pressure on arthropods, but the extent to which these interspecific linkages drive arthropod population dynamics remains unclear. Wolf spiders are dominant and ecologically important arctic predators that experience high rates of egg sac parasitism by wasps. We investigated potential changes in egg sac parasitism rates at two rapidly warming sites in Greenland: a high-arctic site (18 years of data, 1,088 egg sacs) and a low-arctic site (5 years of data, 538 egg sacs). While up to 13% of egg sacs were parasitized annually in the low-arctic site, we found no evidence of it at the high-arctic site despite the presence of congeneric parasitoid species at both locations. The surprising lack of parasitism in the north suggests that populations of this widespread spider species have different eco-evolutionary histories and may respond differentially to climate change.

Parasitoids are functionally predators of their arthropod (insects, spiders etc…) prey. Parasitoids serve important roles in the evolution and regulation of their prey populations; this may be particularly true with egg sac parasitoids which can destroy the entire contents of egg clutches. We used two populations of wolf spiders in the low and high arctic to determine whether certain populations of this species were under different parasitoid pressures. We detected up to 13.33% of the egg sacs were parasitized at the low arctic site (5 years of data) and zero evidence of parasitism at the high arctic site (18 years of data). Our results suggest that the high arctic population is persisting in enemy-free space, with none of the predation pressures faced by the low arctic populations. 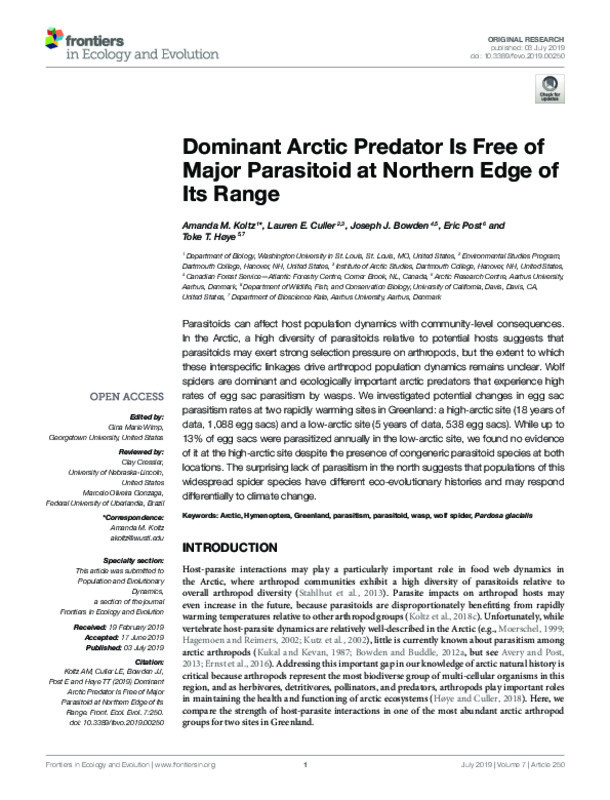