Although there is growing evidence that silicon (Si)‐based plant defenses effectively reduce both the palatability and digestibility of leaves, and thus impact nutrient assimilation by insect herbivores, much less is known about how this is affected by extrinsic and intrinsic factors. For example, do herbivores exhibit compensatory feeding on poor‐quality diets with Si or are Si defenses less effective in agroecosystems where high N availability increases plant quality? To investigate the interactive effects of N and Si on insect feeding, we conducted insect performance and compensatory feeding bioassays using maize, Zea mays L. (Poaceae), and the true armyworm, Pseudeletia unipuncta Haworth (Lepidoptera: Noctuidae). In the performance assay, the addition of Si alone resulted in increased larval mortality compared with the controls, likely because early instars with poorly developed mandibles could not feed effectively. However, larvae fed on plants treated with both Si and N survived better than on plants treated with Si only, although pupal mass did not differ between treatments. In our compensatory assay, Si addition reduced maize consumption, but increased both armyworm approximate digestibility and N assimilation efficiency, suggesting that enhanced post‐ingestion feeding physiology, rather than compensatory food intake, could have accounted for the lack of Si effects on pupal weight. Overall, our results demonstrate that, similar to other chemical and mechanical defenses, the effectiveness of plant Si defense is influenced by plant nutrient status and consumer compensatory ability.

While there is growing evidence that silicon (Si)-based plant defenses effectively reduce plant palatability and digestibility, resulting in reduced herbivore performance, there is much less information about how this is affected by extrinsic and intrinsic factors. To explore the effects of nitrogen (N) and silicon (Si) on insect feeding, we conducted a series of feeding trials exploring corn consumption and performance responses in the true armyworm. In the performance trial, there was increased larval mortality on Si-treated plants compared to the controls, although this was reversed when N was added in conjunction with Si. In the compensatory feeding trial, Si addition reduced corn consumption, but increased both digestibility and N absorption efficiency. Our results indicate that similar to other chemical and mechanical defenses, the effectiveness of plant Si defense is influenced by plant nutrient status and consumer compensatory ability. 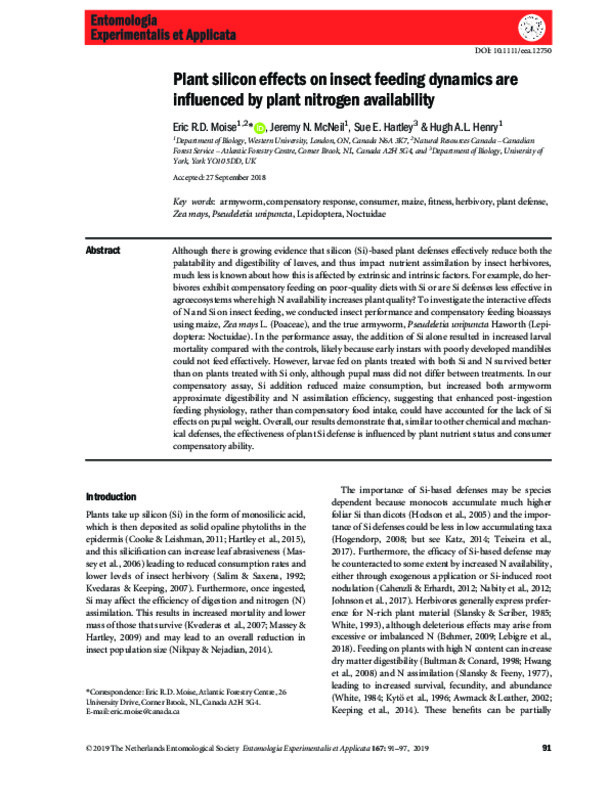