"The hummock–hollow classification framework used to categorize peatland ecosystem microtopography is pervasive throughout peatland experimental designs and current peatland ecosystem modeling approaches. However, identifying what constitutes a representative hummock–hollow pair within a site and characterizing hummock–hollow variability within or between peatlands remains largely unassessed. Using structure from motion (SfM), high-resolution digital elevation models (DEMs) of hummock–hollow microtopography were used to (1) examine how much area needs to be sampled to characterize sitelevel microtopographic variation; and (2) examine the potential role of microtopographic shape/structure on biogeochemical fluxes using plot-level data from nine northern peatlands. To capture 95% of site-level microtopographic variability, on average, an aggregate sampling area of 32m2 composed of 10 randomly located plots was required. Both site- (i.e. transect data) and plot-level (i.e. SfM-derived DEM) results show that microtopographic variability can be described as a fractal at the submeter scale, where contributions to total variance are very small below a 0.5m length scale. Microtopography at the plot level was often found to be non-bimodal, as assessed using a Gaussian mixture model (GMM). Our findings suggest that the non-bimodal distribution of microtopography at the plot level may result in an undersampling of intermediate topographic positions. Extended to the modeling domain, an underrepresentation of intermediate microtopographic positions is shown to lead to potentially large flux biases over a wide range of water table positions for ecosystem processes which are non-linearly related to water and energy availability at the moss surface. Moreover, our simple modeling results suggest that much of the bias can be eliminated by representing microtopography with several classes rather than the traditional two (i.e. hummock/ hollow). A range of tools examined herein can be used to easily parameterize peatland models, from GMMs used as simple transfer functions to spatially explicit fractal landscapes based on simple power-law relations between microtopographic variability and scale."

Peatland ecosystems are widespread in Canada, covering around 25% of the boreal forest. Often, the moss growth in peatlands forms two visually distinct areas: hummocks of high moss growth (30 cm high and 1-2 metres across) as well as lower hollows, where water is often present at the surface. Traditionally, scientists studying peatlands will focus their observations on these two units, using them as two distinct and mutually exclusive categories for their observations of plants, carbon storage, or other metrics. In this study, we use a digital photography technique that creates a very dense (~3 cm) grid of moss surface elevations in order to study whether in fact peatland systems are best split into the hummock vs hollow category. Photographs and moss surface height models were gathered from a number of peatlands in Canada, the USA, and northern Europe. Overall, we found there was little evidence from examining the distributions of heights for a “bimodal” distribution, that is, a distinct abundance of elevations corresponding to hummocks and hollows. Rather, it appears hummocks and hollows are two ends of a continuum of elevations in a peatland. To test the importance of this continuum approach vs the two category approach, we used published models of carbon emissions from peatlands that are sensitive to the water table depth (i.e. moss surface height). We found large differences in the whole-peatland scale carbon estimate coming out of a model if one uses out continuum approach vs the simpler hummock vs hollow categories. This suggests the up-scaling of carbon emissions from point measurements to the whole-peatland scale needs to be done via our continuum approach, and that splitting a peatland into two simple categories misses out on a large portion of intermediate height moss area. This has meaningful implications for many global carbon models. 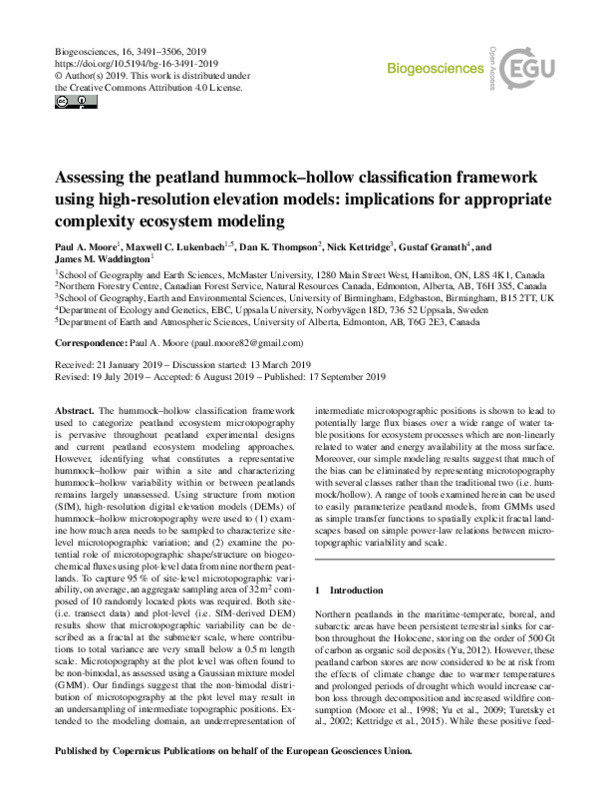