Bark beetles (family: Curculionidae; subfamily: Scolytinae) in the Dendroctonus and Ips genera are the most destructive forest pests in the Northern hemisphere. They use cytochromes P450 (P450s) to detoxify tree-produced terpenes to produce pheromones, in de novo pheromone production and to oxidize odorants on antennae. Many Dendroctonus spp. use trans-verbenol as an aggregation pheromone, and it is formed from host-tree produced α-pinene hydroxylated by CYP6DE1 during larval stages, stored as verbenyl ester of fatty acids, and then released when the female begins feeding on a new host tree. Ips spp. hydroxylate de novo produced myrcene to form ipsdienol. Subsequent steps form the appropriate enantiomeric composition of ipsdienol and convert ipsdienol to ipsenol. In this article we review recent progress in elucidating the functions of P450s in Ips and Dendroctonus species and in doing so provide insights into the role of these enzymes in host phytochemical detoxification and pheromone production. 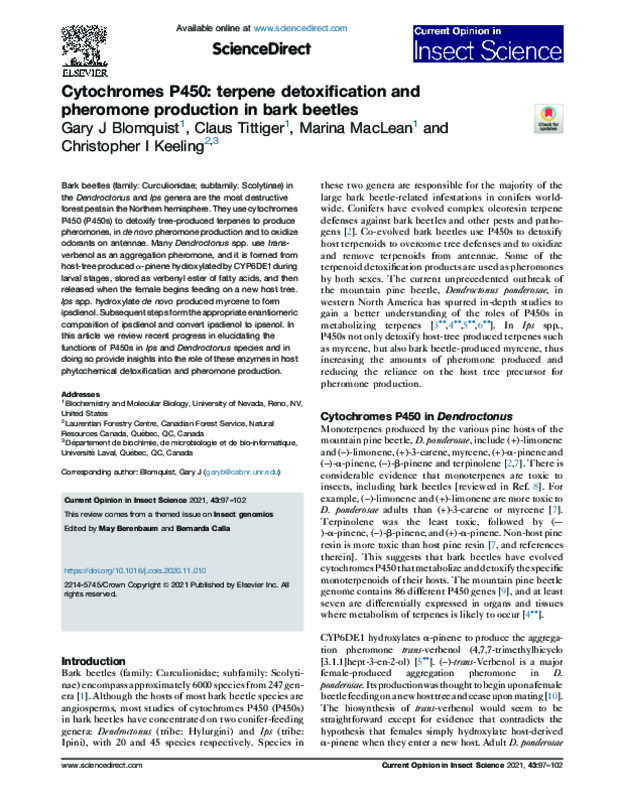