The egg parasitoid Trichogramma spp. (Hymenoptera: Trichogrammatidae) is a widely used biocontrol agent against lepidopteran pests. Historically, Trichogramma were deployed either by plane or by using cardboard cards on which parasitized eggs are glued and manually installed at sites. Plane deployment is costly and card installation is time consuming, but the use of Trichogramma has been shown to be efficient against several pests. In 2016 and 2017, a research project investigated the potential use of unmanned aerial system for distributing Trichogramma as biocontrol agents against two major pests: an agricultural pest of maize, the European corn borer, Ostrinia nubilalis (Hübner) (Lepidoptera: Crambidae), and a forest pest, the eastern spruce budworm, Choristoneura fumiferana (Clemens) (Lepidoptera: Tortricidae). Exposure duration of parasitized eggs to field conditions (temperature, predation, etc.) in maize fields influenced the Trichogramma’s emergence rate, suggesting that timing of parasitoid releases with their emergence is essential. Although parasitism of naturally occurring eggs in maize fields could not be compared due to the low density of the European corn borer, parasitism of sentinel eggs by Trichogramma was more prominent in plots with unmanned aircraft systems (UAS)-releases compared to control plots. For spruce budworm, treatment with Trichogramma increased egg parasitism and there was no difference between the deployment by UAS and by Trichocards. We discuss these results in the context of pest biology and management. We also discuss the advantages and shortcomings of both methods and offer insights into where future work might go to further leverage the use of UAS in managing these important pests. 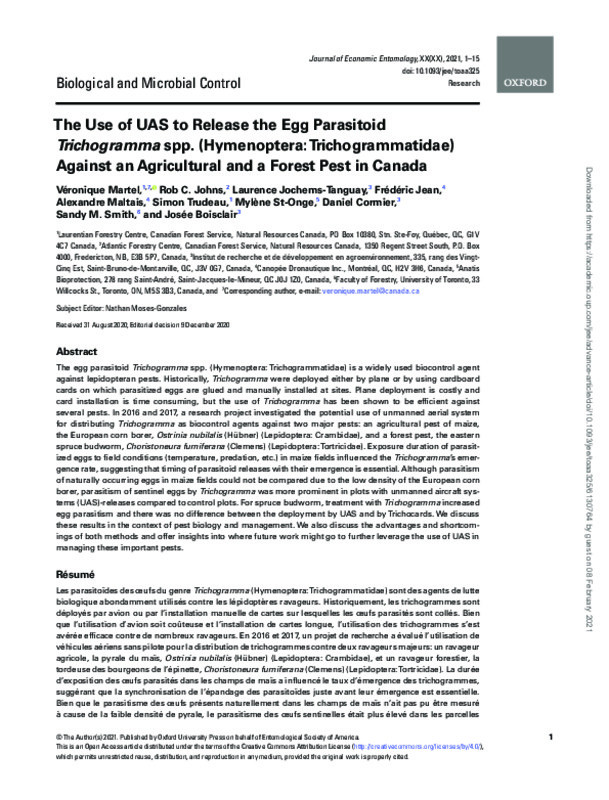