Effect of geraniin extracted from sugar maple (Acer saccharum) leaves on the viability of the phytopathogen Xanthomonas campestris pv. vitians was evaluated with the SYTOX Green nucleic acid stain, penetrating only compromised membranes, and plate counts. In parallel, structural changes of treated bacteria were examined in transmission electron microscopy (TEM). Based on SYTOX Green and plate counts, geraniin at the minimum bactericidal concentration (3.125 mg/ml) increased mortality after 45 min by 37% and 62%, respectively, when compared with controls. According to observations in TEM, geraniin caused morphological alterations of these rod-shaped bacteria, including degradation of their envelopes, as also suggested by the incorporation of SYTOX. These alterations were often accompanied by cytoplasm leakage and the formation of more pronounced whitish areas in the cytoplasm similar to vacuolization. Moreover, multi-membranous and/ or –wall systems were at times formed in the treated bacteria. The presence of some extracellular electron-dense material was frequently noted around the treated bacteria. The matrix surrounding control bacteria tended to disappear after geraniin treatment. This study highlights for the first time the effect of geraniin on bacterial ultrastructure, thus contributing to a better understanding of the mechanism by which this molecule exerts antibacterial activity. 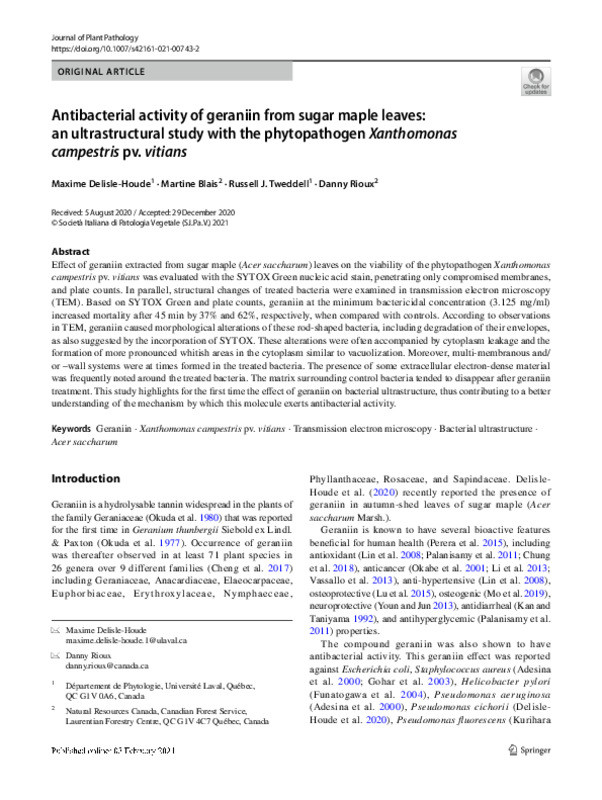