As boreal forests face significant threats from climate change, understanding evolutionary trajectories of coniferous species has become fundamental to adapting management and conservation to a drying climate. We examined the genomic architecture underlying adaptive variation related to drought tolerance in 43 populations of a widespread boreal conifer, white spruce (Picea glauca [Moench] Voss), by combining genotype‐environment associations, genotype‐phenotype associations, and transcriptomics. Adaptive genetic variation was identified by correlating allele frequencies for 6,153 SNPs from 2,606 candidate genes with temperature, precipitation and aridity gradients, and testing for significant associations between genotypes and eleven dendrometric and drought‐related traits (i.e. anatomical, growth response, and climate‐sensitivity traits) using a polygenic model. We identified a set of 285 genes significantly associated with a climatic factor or a phenotypic trait, including 110 of these that were differentially expressed in response to drought under greenhouse‐controlled conditions. The interlinked phenotype‐genotype‐environment network revealed eight high‐confidence genes involved in white spruce adaptation to drought, of which four were drought‐responsive in the expression analysis. Our findings represent a significant step toward the characterization of the genomic basis of drought tolerance and adaptation to climate in conifers, which is essential to enable the establishment of resilient forests in view of new climate conditions. 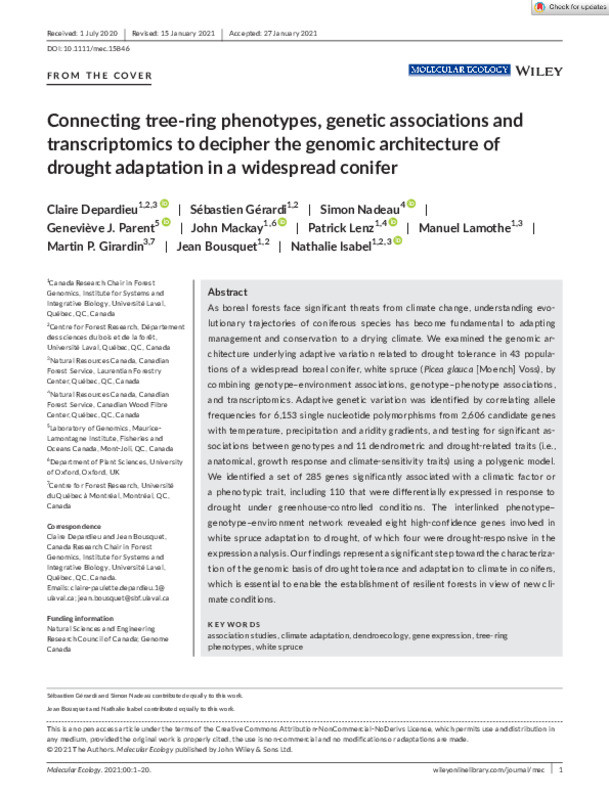