Vitis vinifera L. can be divided into two subspecies, V. vinifera subsp. vinifera, the cultivated grapevine, and its wild ancestor, V. vinifera subsp. sylvestris. Three flower types have been described: hermaphrodite and female in some varieties of vinifera, and male or female flowers in sylvestris. We have conducted an expression analysis of the functional genes candidate to sex determination in the newly defined sex locus described by Picq et al (2014) using four flower types. The candidate gene Ethylene overproducer-1 (ETO1) localized in the sex locus region and which inhibits the enzyme activity of the enzyme ACS (1-aminocyclopropane-1-carboxylic acid synthase) was showed highly significantly different expression pattern according to the sex flower. Other genes studied in the sex locus do not reveal significant different expression patterns. For genes located outside of the sex locus, only the SAUR (Small auxin up RNAs) protein and the ACS gene showed different expression among sex flowers. Therefore, as ETO1 is only expressed in female and hermaphrodite flowers, it could be a good candidate for the recessive female fertility mutation and ACS copy could be implied in the reaction cascade leading to the inhibition of stamens in female flowers. However, the ETO1 only negatively interacts with type 2 ACS and our ACS phylogeny analysis confirmed that the VviACS copy is not type 2. Therefore, it is unlikely that there is such molecular interaction in grapevine. Another hypothesis could be that the molecular mechanisms that regulated the activity of VviACS2 are induced by the VvETO1 protein regulating the activity of both families of ACS type I and type 2. The last gene showing differential expression according to sex is the SAUR protein. This gene consists in early auxin response genes family playing key role in hormonal and environmental signals. Our results pointed out that one gene (ETO1) inside of the flower sex locus region and two genes (ACS, SAUR) located outside of the sex locus region, could be considered as putative candidate genes for the control of sexual traits in grapevine. 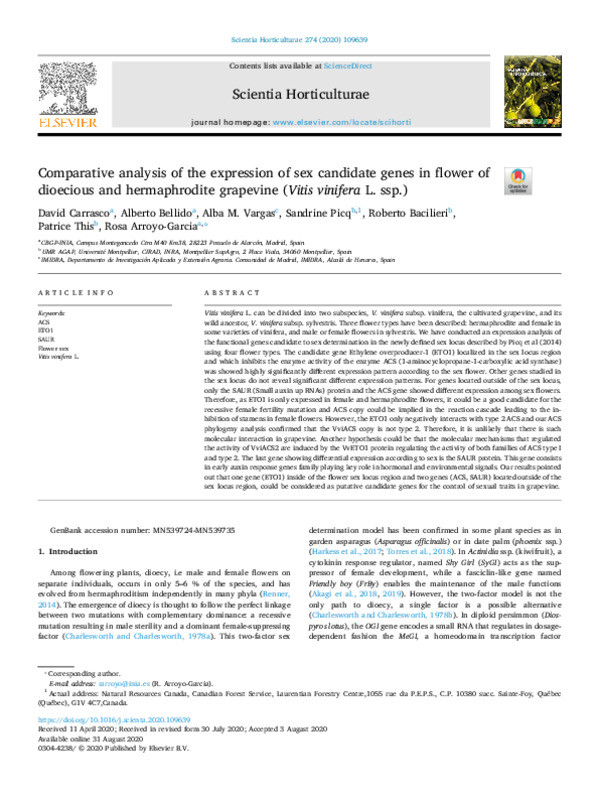