This is the second article of a series of three where we develop temperature-driven models to describe the seasonal interactions between parasitoids and their hosts which we use to explore the impact of climate on their spatiotemporal biology. Here, we model the biology of Meteorus trachynotus (Hymenoptera: Braconidae) with an individual-based model of its daily interactions with two host species. This model predicts the performance of the parasitoid in response to temperature affecting its seasonal development and that of the two hosts. We compare model output with an extensive set of field observations from natural host populations. The predicted activity of the first adult parasitoid generation closely matches the seasonal pattern of attack on the spruce budworm, Choristoneura fumiferana (Lepidoptera: Tortricidae) within the limitations of available data. The model predicts 1–4 full generations of M. trachynotus per year in eastern North America, with generations well synchronized with larvae of a known overwintering host, the obliquebanded leafroller Choristoneura rosaceana. The model predicts the observed density dependence of parasitism on spruce budworm. Predicted performance exhibits spatial variation caused by complex life-history interactions, especially synchrony with the overwintering host. This leads to a better performance in warm but not hot environments at middle latitudes and elevations. The model’s predicted spatial patterns correspond closely to our field observations on the frequency of parasitism on spruce budworm. Under climate change, the model predicts that the performance of M. trachynotus populations will improve in the northern portion of its range. 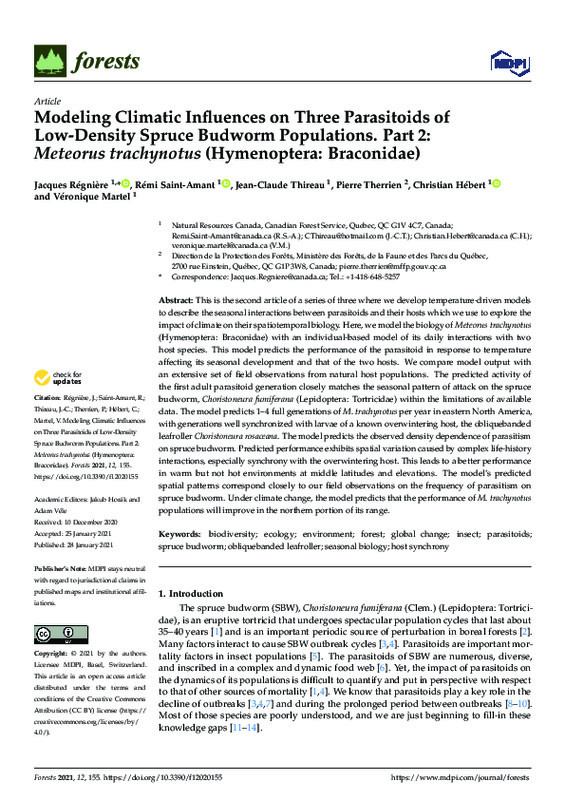