The hemlock looper, Lambdina fiscellaria, is a major defoliator of coniferous forests. As looper larvae are known for their wandering habits, we determined the underlying behavioral mechanisms that enable them to orient in the environment. First, we quantified the response of all larval stages to light or gravity, and to both stimuli tested simultaneously. Second, we evaluated the combined effect of substrate texture and light on the selection of pupation sites by wandering mature larvae (4th instar +10 days). We found that light attracted neonates and newly molted larvae of all stages, but response indices decreased significantly between the second and third larval stages. In a 45° inclined tube, larvae showed a geonegative response that remained relatively constant from one stage to the next. No synergy between the two stimuli was observed when a light source was placed on top of the inclined tube. In contrast, when the light source was placed at the base, the light signal dominated the gravity stimulus. Finally, wandering larvae were indifferent to unidirectional light and reacted positively to gravity. They preferred to pupate in a dark environment, a choice that could be modulated by positive photokinesis. Their final selection of a pupation site also involved physical contact with the substrate, which resembles positive thigmokinesis. The ecological significance of these results is discussed in relation to the spatial distribution of the various larval stages on host trees. 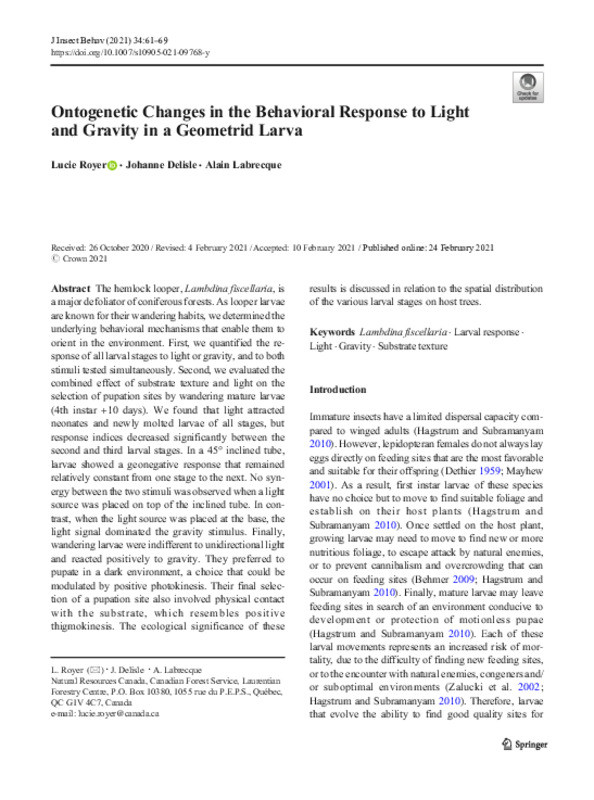