Natural forest regeneration after natural or anthropogenic disturbance is difficult to predict given its high variability. The process is poorly documented for commercial northern hardwood species in the Acadian forest of eastern Canada. Our objective was to identify the silvicultural, environmental, and ecological factors that best explain the variability in sapling density and occurrence of two commercial tolerant hardwood species in New Brunswick: American beech (Fagus grandifolia Ehrh.) and sugar maple (Acer saccharum Marsh.). Forty-three permanent sample plots were established in 2002 and measured before harvesting in 2004. Sapling density and occurrence were measured 14 years after harvesting. The results showed that the interactions between the species and the residual merchantable basal area and between the species and the percent of hardwoods in the original stand best explained the sapling density and occurrence variation of tolerant hardwoods. The sapling density of sugar maple increased with increasing merchantable residual basal area. However, the effect of this variable was not significant for the density of American beech saplings. The density and occurrence of tolerant hardwood saplings both increased along with the percent of hardwoods in the original stand. These results provide an improved understanding about tolerant hardwood regeneration dynamics in New Brunswick forests. 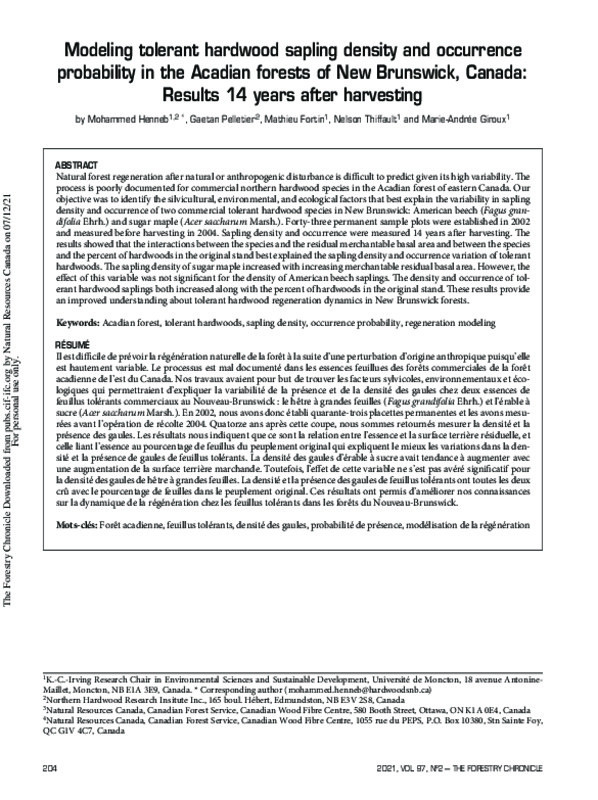