Climate warming is expected to positively alter upward and poleward treelines which are controlled by low temperature and a short growing season. Despite the importance of treelines as a bioassay of climate change, a global field assessment and posterior forecasting of tree growth at annual scales is lacking. Using annually resolved tree-ring data located across Eurasia and the Americas, we quantified and modeled the relationship between temperature and radial growth at treeline during the 20th century. We then tested whether this temperature–growth association will remain stable during the 21st century using a forward model under two climate scenarios (RCP 4.5 and 8.5). During the 20th century, growth enhancements were common in most sites, and temperature and growth showed positive trends. Interestingly, the relationship between temperature and growth trends was contingent on tree age suggesting biogeographic patterns in treeline growth are contingent on local factors besides climate warming. Simulations forecast temperature–growth decoupling during the 21st century. The growing season at treeline is projected to lengthen and growth rates would increase and become less dependent on temperature rise. These forecasts illustrate how growth may decouple from climate warming in cold regions and near the margins of tree existence. Such projected temperature–growth decoupling could impact ecosystem processes in mountain and polar biomes, with feedbacks on climate warming.

(Objective) Do a large scale data and simulation analysis of how climate warming will affect tree growth at treelines around the world. (What did researchers do) Using tree-ring data from trees in Eurasia and the Americas, we looked at tree-climate relationships during the 20th century. We then tested whether this temperature-growth association will remain stable during 21st-century using a process-based model under two climate scenarios (RCP 4.5 and 8.5). (Key Findings) During the 20th century, temperature and growth were related to each other. However, simulations of the future showed that these become less related to one another, likely because moisture becomes limiting. This means that forecasts of tree growth in cold regions and near the margins of tree existence will be incorrect if they think temperature stays the driver of growth. This will have impacts on other ecosystem processes, with feedbacks on climate warming. (Scientific Impact) Many efforts are made in CFS and around the world to forecast tree growth under climate change. This study shows that it is likely inappropriate to assume that the current temperature driver of growth in the far Northern and high Mountain regions will show inappropriately good growth. 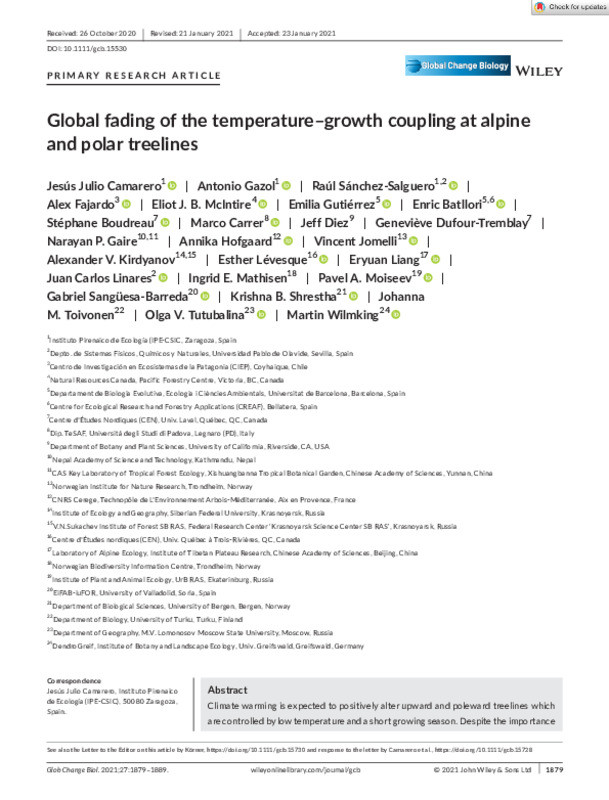