Drought is usually the precursor to large wildfires in northwestern boreal Canada, a region with both large wildfire potential and extensive peatland cover. Fire is a contagious process, and given weather conducive to burning, wildfires may be naturally limited by the connectivity of fuels and the connectivity of landscapes such as peatlands. Boreal peatlands fragment landscapes when wet and connect them when dry. The aim of this paper is to construct a framework by which the hydrological dynamics of boreal peatlands can be incorporated into standard wildfire likelihood models, in this case the Canadian Burn-P3 model. We computed hydrologically dynamic vegetation cover for peatlands (37% of the study area) on a real landscape in the Canadian boreal plain, corresponding to varying water table levels representing wet, moderate, and severely dry fuel moisture and hydrological conditions. Despite constant atmospheric drivers of fire spread (air temperature, humidity, and wind speed) between drought scenarios, fire activity increased 6-fold in moderate drought relative to a low drought baseline; severe (1 in 40 years) drought scenarios drove fires into previously fire-restrictive environments. Fire size increased 5-fold during moderate drought conditions and a further 20–25% during severe drought. Future climate change is projected to lead to an increase in the incidence of severe drought in boreal forests, leading to increases in burned area due to increasing fire frequency and size where peatlands are most abundant. Future climate change in regions where peatlands have historically acted as important barriers to fire spread may amplify ongoing increases in fire activity already observed in Western North American forests.

Peatlands form 30-50% of the landscape in many parts of the boreal forest, such as northern Ontario, northern Manitoba, and the southern Northwest Territories. These peatlands can often exist as a patchwork, surrounding drier forests like pine or aspen. Despite the presence of a landscape that often has standing water at the surface, wildfire is still widespread in these regions in some years. Our current fire spread models in Canada do not account for the presence of this standing water (and correspond lack of fire spread) as they do not map out peatlands explicitly. In this study, we adapted the fire spread model Burn-P3 (widely used in Canada to quantify fire risk) to account for peatlands, and then examined the role that peatlands have in altering fire spread potential during wet, moderate drought, and severe drought conditions. Wood Buffalo National Park in northern Alberta was used as a study area. Overall, we found that during wetter periods, the lack of fire spread in the 37% of the park that is peatland was effective in preventing fires even in drier upland forest from spreading far or wide. But under moderate drought conditions when the faster-drying peatlands were able to allow fire to spread even slowly, these peatlands allowed for fire to connect across drier landscapes, resulting six times the amount of burned area compared to when peatlands did not carry fire spread. Very severe drought where all peatlands were dry enough to spread fire widely only caused a smaller 25% increase in modelled burned area. Overall, this simulation study matches historical links between drought and burned area in the region, and makes the case for including peatlands as a distinct element in wildfire spread modelling. 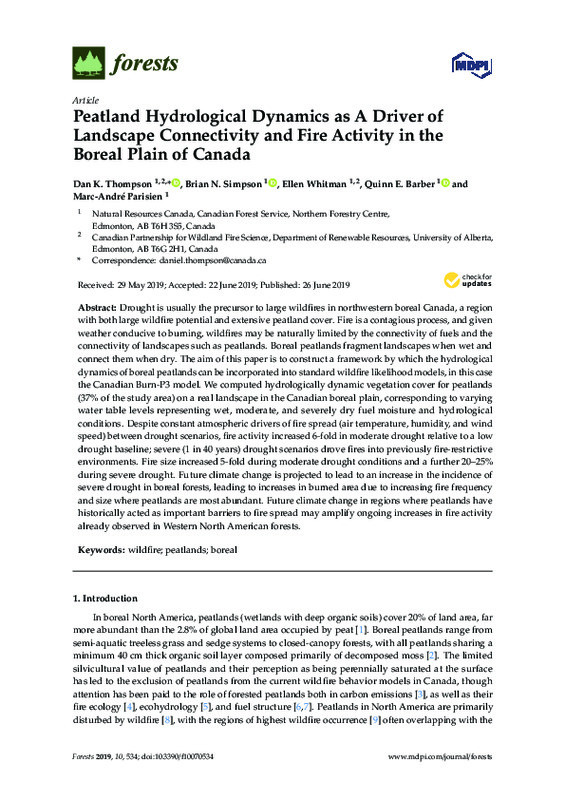