Hydrogeologic setting strongly influences the hydrologic function of peatland systems. For base–rich fens in the Athabasca Oil Sands Region (AOSR) of the Western Boreal Plain, northern Alberta, local groundwater flow from gently sloping adjacent uplands has been shown to help sustain fen water tables and chemistry. Natural forest disturbance in the AOSR is dominated by wildfire, with peatlands susceptible to combustion and subsequent carbon release. However, few studies have aimed to characterize the degree of change to the hydrophysical properties of upland soils following wildfire. To address this, we measured differences in water repellency and hydrophysical properties of burned and unburned upland organic and mineral soils in a burned moderate–rich fen watershed (Poplar Fen), ~25 km north of Fort McMurray. Samples were taken in the fall of 2017, ~1.5 years after the watershed burned (May 2016). Study locations included burned and unburned jack pine–dominated upland and black spruce–dominated riparian areas. Results illustrated significantly lower water repellency and higher infiltration on burned locations of both land types. Furthermore, no significant differences were detected in organic soil moisture retention in uplands; however, burned organic soil samples had significantly lower water retention in riparian areas. We postulate the lower water retention in riparian areas was due to the greater organic layer thickness there, thus greater fuel load and potential for exceeding the temperature threshold of repellency destruction. Following retention, all soil cores exhibited high hysteresis, with differences in volumetric moisture content averaging 0.38 and 0.34 m3 m−3 at −10 cm pressure for upland and riparian locations, respectively. Our results are contrary to the increased hydrophobicity following burning that is commonly reported in boreal regions. The promoted infiltration, groundwater recharge and subsequent enhanced water supply to fens in the local groundwater system may help in accelerating the moss recovery process.

Wildfires in the boreal forest may burn some or all of the forest organic soil, the layer of decomposing leaves and mosses that sites above a mineral soil (such as clay or sand) in which the trees root themselves. Studies in more arid regions (i.e. southwestern USA, Portugal) have shown that after fire, mineral soils often become hydrophobic (i.e. water-repelling) due to intense soil heating during the fire. This hydrophobicity lowers the ability of rainfall to infiltrate (percolate) into soils. In this study, the very large 2016 Fort Murray fire was studied for its impact on soils. Specifically, a jack pine stand (sandy) and a wetter spruce sand (clay with partially burned organic soil overtop) were studied, as they both are areas where rainfall infiltrates through the soil to provide water for an important wetland. Unlike studies in other regions, it was found that infiltration capacity measured in the field actually increased slightly in burned stands compared to adjacent unburned areas with the same tree cover and soils. Similarly, hydrophobicity measured at the top of the soil also showed large declines in the burned stand. Both of the above measurements indicate that water percolation through the soils to feed the nearby wetland will not be diminished due to the fire. The one negative change that was measured was a decrease in soil water available to tree roots in the burned spruce stand. This indicates that during drought periods, regenerating trees in the burned spruce stand will have a harder time drawing water from the soils. Overall, the study found limited impacts of the large and intense wildfire on the soils, which speaks to the resilience of boreal landscapes to increasing occurrence of wildfire under climate change. 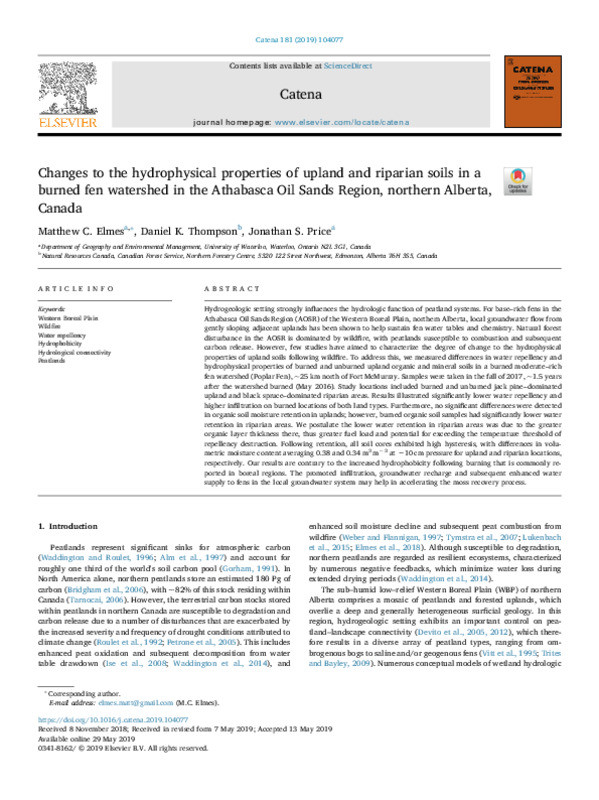