Wildfire evacuations are used to protect lives during wildfires. Existing research has identified that some people stay behind during a mandatory wildfire evacuation and factors that influence evacuation actions, however little is known about how Indigenous peoples respond in the event of a wildfire. This paper presents results of a qualitative study with Mishkeegogamang Ojibway Nation in North-Western Ontario, Canada, that was evacuated due to the SLK 35 wildfire in 2011. Semi-structured interviews were completed to learn how people in Mishkeegogamang responded when they were told to evacuate and factors influencing their actions. Although some participants were willing to leave, some did not want to leave and some stayed behind due to low risk perceptions, and desires to protect dwelling contents, stay home, retain control, and fight the fire. Recommendations are provided for wildfire and emergency managers.

This study examines wildfire evacuation responses in Mishkeegogamang, Ojibway Nation in northern Ontario, Canada, that was evacuated due to wildfire in 2011. During the staged evacuation process, some participants left willingly, while others did not. Some did not want to leave and stayed behind due to low risk perceptions, as well as desires to protect dwelling contents, stay home, retain control and fight the fire. Based on our findings, we recommend that a different approach should be considered to respect the wishes of First Nations while ensuring their public safety in wildfire evacuations. We recommend that emergency managers consider having First Nations stay in their traditional territory if it is safe to do so, and provide the resources to do this safely. If it is not safe to stay in traditional territory, we recommend for First Nations to stay with nearby Indigenous communities for culturally appropriate accommodation, assistance, and support. 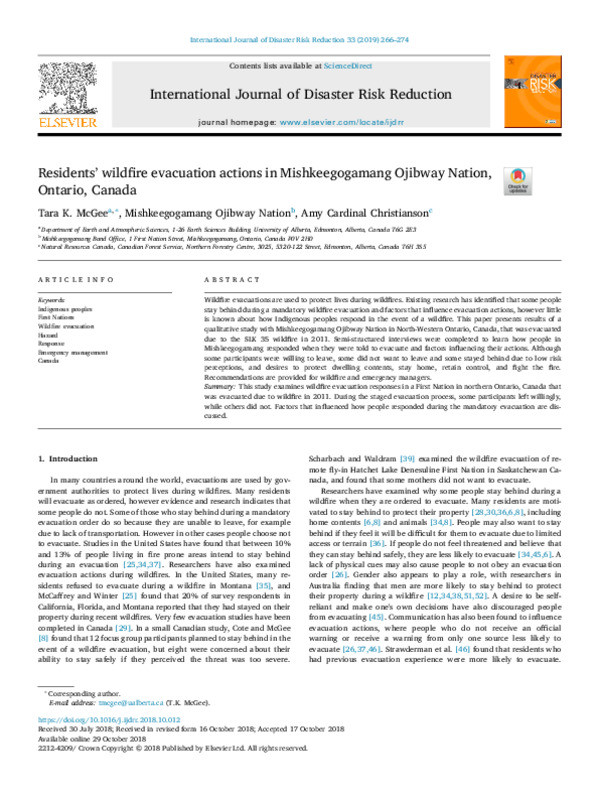