The pervading paradigm in insect phenology models is that the response to a given temperature does not vary within a life stage. The developmental rate functions that have been developed for general use, or for specific insects, have for the most part been temperature-dependent but not age-dependent, except where age is an ordinal variable designating the larval instar. Age dependence, where age is a continuous variable, is not often reported (or investigated), and is rarely included in phenology models. I provide a short review of the seldom-investigated phenomenon of age dependence in developmental response to temperature, and compare the derivation of the winter moth egg phenology model by Salis et al. to the derivation of another egg phenology model with age-dependent responses to temperature I discuss some probable reasons for the discrepancies (acknowledged by Salis et al.) between modelled and observed developmental rates of the winter moth, and discuss the contribution that geographically robust phenology models can make to estimates of species distributions.

Generally insect development models indicate that response to a given temperature does not vary by an insect’s life stage. The tools for general use or for specific insects have mainly been temperature-dependent but not age-dependent, with few exceptions. Age-dependence is rarely reported or included in these models. A short review is provided for the age dependence in developmental response to temperature, and a comparison of the winter moth egg model to another egg model with age-dependent responses to temperature. The discussion includes some potential reasons for the differences between modelled and observed developmental rates of the winter moth, and the contribution that geographically robust models can make to estimates of species distributions. There are many factors that determine a species’ global distribution, but climate has long been recognized as a dominant factor. Incorporating age-dependence into temperature-dependent models will improve the robustness of development and range predictions. 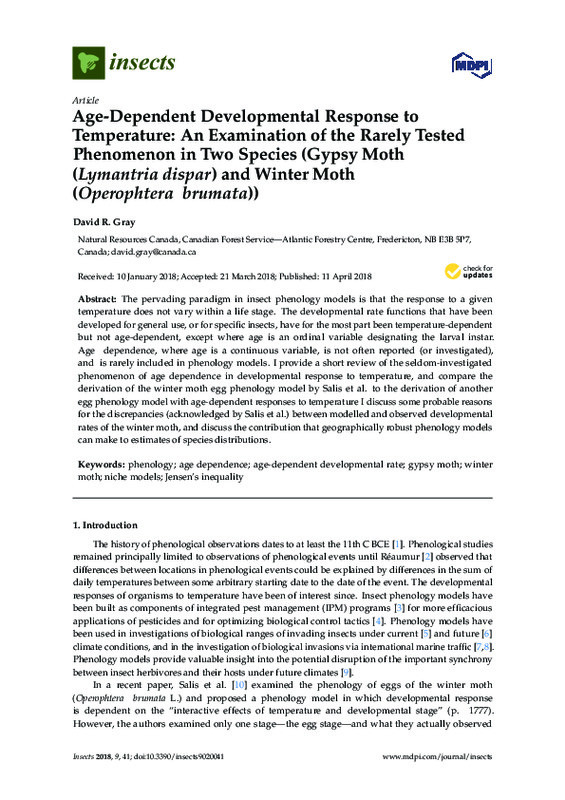