Measures of soil nutrient availability such as concentrations of nitrogen and phosphorus ([N] and [P]) are important indicators of terrestrial productivity. Optimal plant growth and ecosystem functioning are also strongly correlated with nutrient ratios in soils. Long-term trends in soil [C], [N], [P], and their stoichiometric ratios during secondary succession in the fire-driven boreal forest remain unclear. We used replicated 7- to 209-year chronosequences to examine the influence of stand age and overstory composition on [C], [N], and [P] and their ratios in the forest floor, surface (0–15 cm), and subsurface (15–30 cm) mineral soil in the boreal forest of central Canada. In the forest floor, [C] and [N] increased rapidly during the first three decades following fire, after which they fluctuated, but remained larger than in the youngest stands. Surface soil [C] and [N] increased from young to intermediate-aged stands, but decreased in the oldest stands. Subsurface [C] and [N] followed a similar trend, but was higher in the 7-year-old stands. Forest floor [P] followed a gradual, linear increase throughout stand development but of smaller magnitude than [C] and [N]. The temporal pattern of [P] in both mineral soil layers was lower in the 33-year-old stands of all overstory types, suggesting that P resources may be outpaced by their demand during this highly competitive stage of advanced stem exclusion during forest succession. In the forest floor and surface soil, C:N differed not only with stand age but also with overstory type, due to higher C:N in intermediate-aged conifer stands. Forest floor C:P and N:P were higher in the 33- to 146-year-old stands in all overstory types and soil layers, but particularly so in the conifer stands. In the mineral layers, C:N, C:P, and N:P all followed a similar trend. Our results demonstrate the important influence of stand age, overstory composition (as influenced by succession), and soil depth on forest soil nutrient dynamics in boreal forest ecosystems.

Concentrations of nitrogen [N] and phosphorus [P] are measures of soil nutrient availability that indicate the productivity of the overall soil environment. Nutrient ratios in soils are also connected to the most effective plant growth and ecosystem functioning. In this study we examined how stand age and overstory make-up affect carbon [C], nitrogen [N], and phosphorus [P], and their ratios in the forest floor, surface (0-15 cm), and subsurface mineral soil (15-30 cm) in the boreal forest of central Canada. In the forest floor layer, [C] and [N] increased quickly between the 7- and 33-year-old stands, but varied in the older stands. In the surface mineral soil (0-15 cm), there was no significant change in [C] until stands were more than 98 years old, and decreased in the 209-year-old stands. In the subsurface mineral soil (15-30 cm), [C] and [N] decreased from the 7-year-old to 15-year-old stands, then increased with stand age, but decreased in the 209-year-old stands. The results indicate the role of stand age, overstory competition and soil depth on soil nutrient dynamics in the boreal forest. 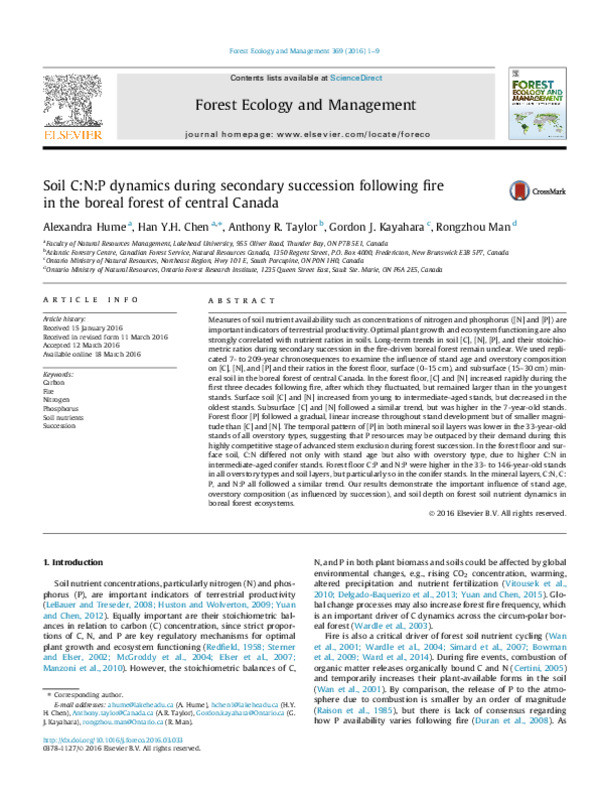