Insect herbivory may drive evolution by selecting for trees with heritable resistance against defoliation. The spruce budworm (Choristoneura fumiferana, SBW) is a highly damaging forest insect pest that can affect population structure of white spruce (Picea glauca) in North America. Resistance against SBW was recently described in white spruce and was linked to three constitutive resistance biomarkers: the phenolic compounds piceol and pungenol, and expression of a beta-glucosidase encoding gene (Pgβglu-1). We investigated the phenotypic variability and heritability of these resistance biomarkers and of picein, the precursor of piceol, in the foliage of 874 trees belonging to 33 full-sib families and 71 clonal lines under evaluation in seven field locations in Eastern Canada. We aimed to (i) determine their genetic control, (ii) estimate the genetic and phenotypic correlations among defense biomarkers, and (iii) determine whether their constitutive levels are associated with detrimental trade-offs on growth. Quantitative genetics analyses indicated that all four traits are moderately to highly heritable. The full-sib and clonal analyses showed that additive and non-additive genetic effects play major and minor roles, respectively. Positive genetic and phenotypic correlations between resistance biomarkers and primary growth indicated that there is no trade-off between total height and height increment and resistance traits, contradicting the GDBH (Growth Differentiation Balance Hypothesis). Our findings about the predominant additive genetic basis of the resistance biomarkers show that adaptive evolution of white spruce natural populations to resist to SBW is possible and that potentially important gains could also be expected from artificial selection.

The spruce budworm (SBW) is a forest insect pest that causes damage to boreal trees in North America. Resistance against SBW in white spruce had previously been linked to the content of specific chemical compounds in the trees’ needles (compounds called acetophenones, which are used as resistance biomarkers). We explored characteristics of these resistance biomarkers in 874 trees in seven field locations in Eastern Canada. The results regarding the resistance biomarkers show that white spruce evolved naturally to resist SBW. No indication for a trade-off between growth and the energy-intensive resistance mechanism were found. Artificial selection could further enhance SBW resistance in planting stock. 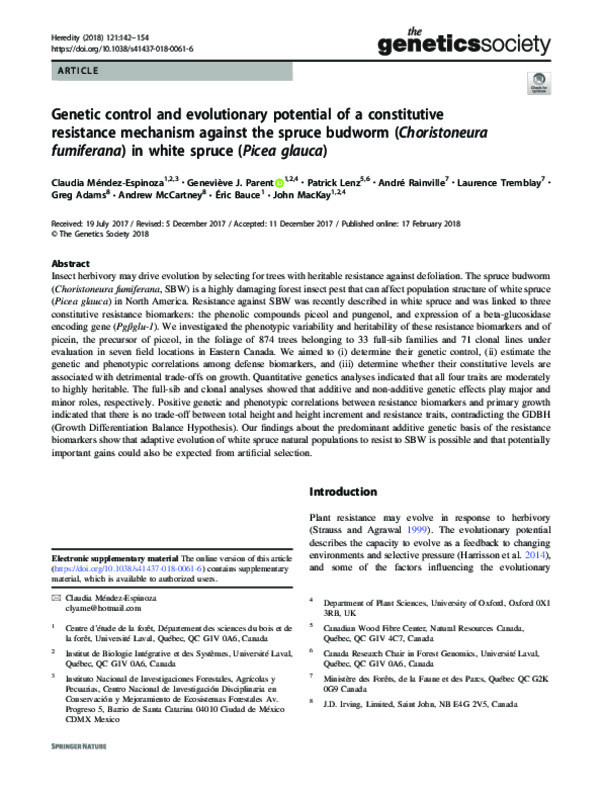