We sampled outbreak populations of western spruce budworm, Choristoneura occidentalis (Lepidoptera: Tortricidae), between 1997 and 2016 in Douglas-fir forests in the interior of British Columbia, Canada. Annual rates of change in population densities were correlated with generation survival, modulated by egg recruitment via dispersal of moths. Most temporal variation in generation survival was the result of variation in survival of small, non-feeding larval stages. Survival rates of feeding larval and pupal stages determined the magnitude of generation survival but contributed little to temporal trend. Survival of small larvae was the product of density-related losses of larvae dispersing to and from hibernation sites and weather-related stress caused by warm temperatures in late summer and early spring. Overwinter survival improved in cooler years and at higher elevations. Survival of feeding larvae and pupae was associated with mortality by natural enemies, in particular a few species of dominant, ubiquitous endoparasitoids, and an episodic, virulent baculovirus. Recruitment of eggs indicated emigration of gravid moths independent of defoliation but proportional to density of local moths. During periods of increasing and decreasing population densities over a large outbreak area, a marked differential in adult densities among locations resulted in greater than expected per-capita egg recruitment to areas of relatively low density and vice versa, indicative of net exchange of gravid moths from high- to low-density populations. The result was homogenization of egg densities among locations, apparent synchrony of the outbreak at the large scale, and extended duration of the outbreak at some locations, despite declining generation survival. These results are compared with field studies of the closely related spruce budworm, Choristoneura fumiferana. We suggest our interpretation applies more generally and outbreaks of conifer-feeding budworms are maintained for several years by compensatory survival of sequential life-history stages and spatio-temporal smoothing of densities via dispersal of gravid moths. Parasitoids and pathogens can cause sudden declines in densities, but populations inevitably wane as a result of cumulative degradation of their resource. The interaction and temporal sequence of bottom-up and top-down factors explain the similarities and differences in outbreak characteristics within- and among-budworm species. 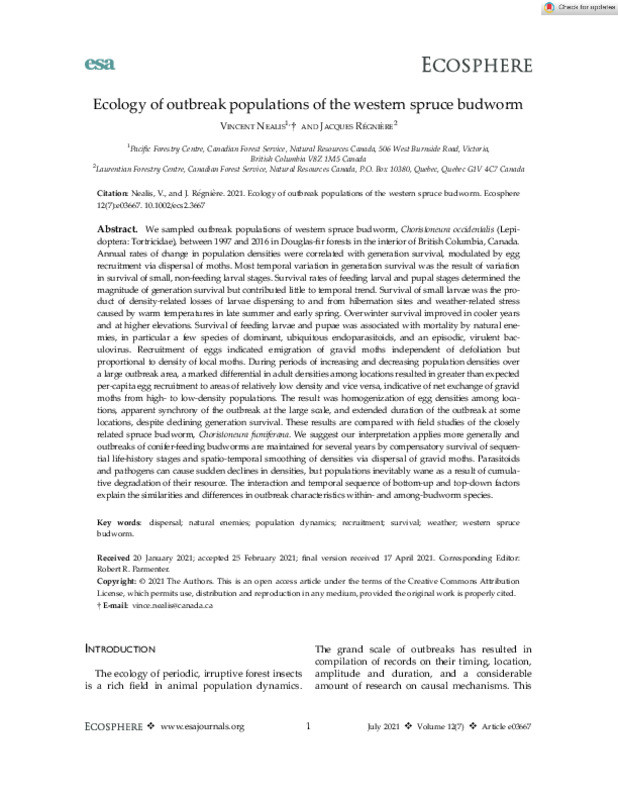