Non-native earthworms have been invading North America since European settlement. Compared to temperate forests, their presence in the boreal forest is much more recent and thus remains understudied, despite the potential threat they represent for soil carbon (C) stocks. Here we compared earthworm-invaded and earthworm- free zones in soil types representative of the boreal forest, including Luvisols, Podzols, and Brunisols (Cambisols). We observed that the forest floor (surface organic layer, or LFH) decreased in thickness after invasion in most cases and developed into a Vermimull, with the loss of the most humified layer (humic or H horizon). Simul-taneously, the surface mineral horizon was reworked by earthworms into a novel Ahu horizon, characterized by higher organic matter and enriched in earthworm casts. Forest floor C stocks decreased by 94% and 59% for Luvisols and Brunisols respectively, while those of Podzols remained apparently unaffected. Mineral soil C stocks in Brunisols increased after invasion, while no changes were observed in Luvisols and Podzols. Our results demonstrated the substantial impact that invading earthworms are having on soil morphological features and C stocks in boreal forests. Effects were similar to what has been reported for temperate forests, although the degree of impact depended on soil type. While C stocks were less affected in the mineral soil compared to the forest floor, the development of a novel surface horizon reworked by earthworms could alter microbial dynamics and impact mineral C persistence. Further research is needed to quantify long-term implications of earthworm presence for boreal soil C stocks. 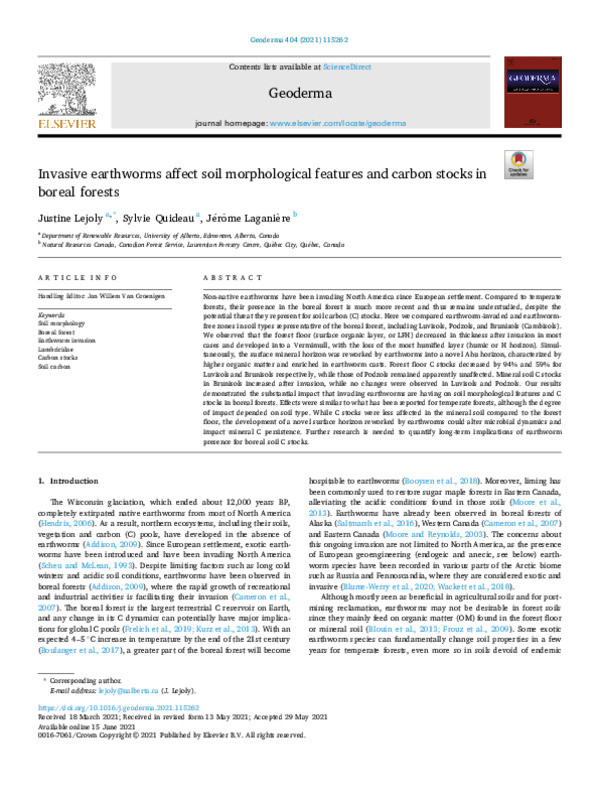