Mushrooms are a little known source of food for large herbivores, but are of high quality because of their high protein content and digestibility. Approximately 50 epigeous and hypogeous mushroom and lichen species have been identified in the diet of cervids so far using macro remains. Our main objective was to determine which mushroom species are consumed by white-tailed deer (Odocoileus virginianus Zimmermann) using a molecular approach. We collected 114 fecal samples from deer harvested in 2014 and 2015 on Anticosti Island (Québec, Canada), extracted total DNA from feces, and amplified fungal DNA specifically via polymerase chain reaction. Amplified fungi DNA was then sequenced with the Illumina method to identify mushroom species consumed by deer. Our results revealed that deer harvested consumed up to 4979 fungal species, including 580 species that appeared to be consumed directly. Adults tended to consume a higher mushroom diversity than juveniles, and mushroom diversity consumed by deer was much higher in 2015 than 2014. Adult females consumed a higher mushroom diversity than males, especially lactating females. Our results contribute to the understanding of the role of mushrooms and their large diversity in white-tailed deer diet 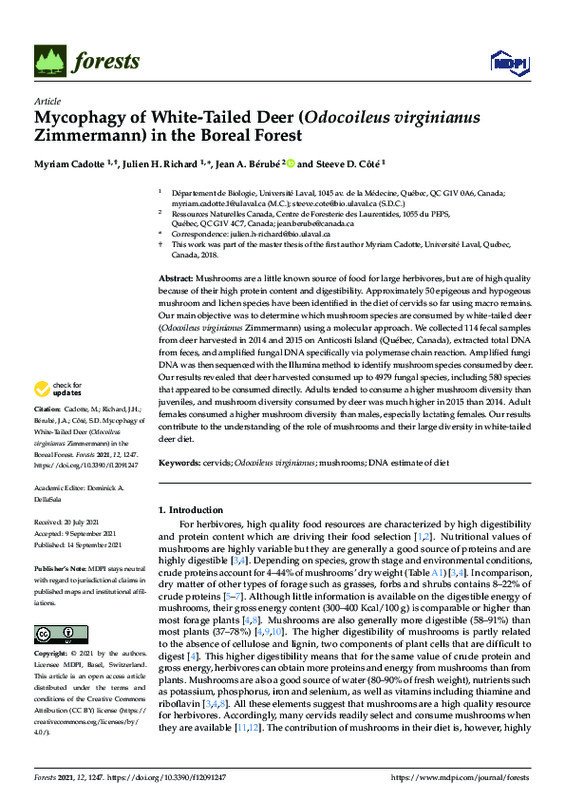