Conifer breeding programmes are increasingly selecting for wood quality in addition to growth so to ensure a sufficient flow of high-quality fibre from future forest plantations. As wood density is one of the most frequently used indicators of wood quality, there is a growing interest to consider this trait in selection, and thus enhance the properties of end-use products from planted trees. However, wood density varies at different scales within trees, with pith-to-bark patterns and year-to-year fluctuations representing two important sources of variation. From both physiological and end-use points of view, it is desirable to produce stems with limited pith-to-bark and year-to-year wood density variation. In the present study, we assessed patterns of pith-to-bark and yearto-year variation in 2196 wood density patterns and evaluated the genetic control of traits characterizing this variation. The experimental data came from a 15-year-old white spruce genetic trial representing 93 full-sib families replicated in two contrasting environments in Quebec, Canada. To separate pith-to-bark from year-toyear variation, non-linear models were developed to describe pith-to-bark patterns of variation in the mean ring density (MRD) of individual trees as well as for latewood density (LWD) and latewood proportion. We observed that pith-to-bark variation was more under genetic control than year-to-year variation, for which only LWD and proportion of latewood width to overall ring width reached moderate genetic control. Little genotype-byenvironment interaction was observed although wood density patterns differed significantly between sites. The present approach could help identify trees or families that tend to have limited pith-to-bark and year-to-year variation in wood density as part of tree genetic improvement programmes to provide future trees with more uniform and desirable wood attributes 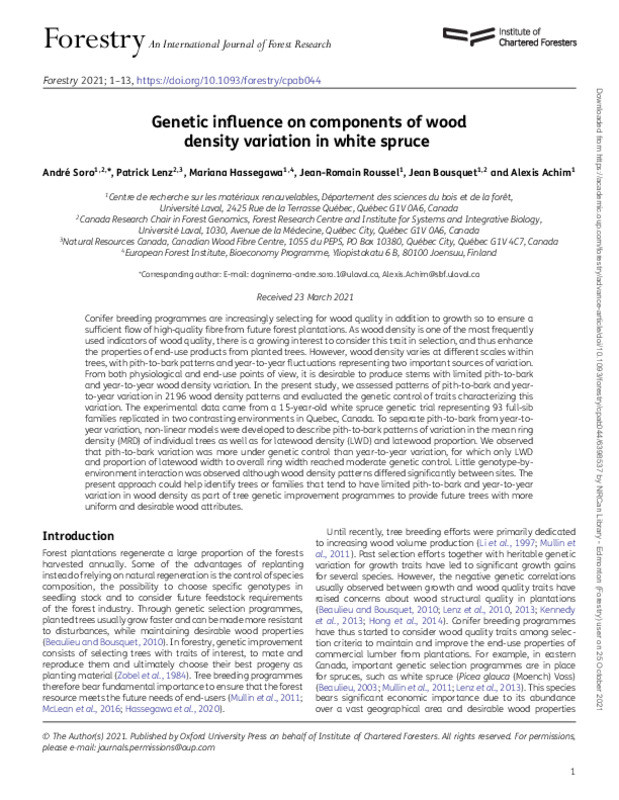