In September 1988, George Tapley of Victoria, British Columbia (lat. 48°30'N, long. 123°20'W) brought to my attention a mistletoe on his apple (Malus sp.). I identified this as Viscum album L., a plant not collected before in Canada. The identification was confirmed and the specimen further specified as a male plant of subspecies album by F.G. Hawksworth (U.S. Forest Service, Fort Collins, CO). A collection was preserved in the Pacific Forestry Centre herbarium as DAVFP 23772. A public request for information and a survey in the now defunct apple orchards in northeastern Victoria by Forestry Canada, Agriculture Canada, and the B.C. Ministry of Forests disclosed three infections, including the first one noted, within 200 m of one another, which were probably derived by human transmission from a fourth infection about 2.8 km away. All occurred on Malus sp. According to the residents, the original infection is more than 37 yr old. V. album was introduced into North America about 85 yr ago near Santa Rosa, California, approximately 1300 km south of Victoria. The parasite now occupies 114 km2 and infects 22 species of hardwoods in California (1). Presence of V. album in Victoria demonstrates that climate will not impede further infection on much of the West Coast, at least as far north as southern Vancouver Island. 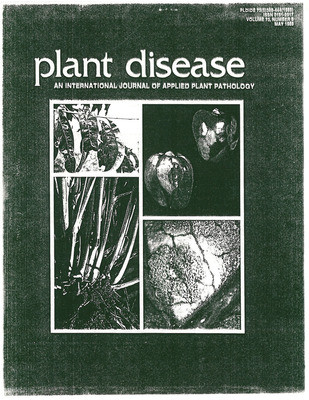