"Progress in reforestation is reviewed and the results of a 1999 survey of seed collection and utilization are presented. The review includes forest depletion, regeneration and seed supply for Canada for the 1960-99 period. Depletion of stocked, timber-productive land has increased from less than 2 million ha annually to just under 2.5 million ha, primarily due to an increase in harvesting from about 800 000 ha to slightly over 1 million ha in recent years, and also due to larger fires during the last decade. The depleted area amounts to 1 % of the total commercial forest. Natural regeneration consistently covered more than 60% of the depleted area. Artificial regeneration (seeding and planting) has increased dramatically from 86 000 ha per year in 1965 to 5 13 000 ha in 1990, and has since levelled off at about 460 000 ha. The seed supply situation has also improved greatly, primarily due to tree improvement that resulted in the establishment of seed orchards, which were expanded from 364 ha in 1981 to 3008 ha in 1995. New analytical biochemical methods suggest that in orchard seed, genetic variation and diversity are maintained. The seed survey, including 36 conifer and 29 broadleaf species, indicated that 2.5 billion seeds were collected in 1999 (which was not a good seed year) and 3.9 billion seeds were sown. These 3.9 billion seeds appear to be sufficient to again restock approximately 460 000 ha per year, i.e., the same area as regenerated annually in the 1995-99 period. Improved seed treatment and sowing methods appear to have made seedling production substantially more efficient during the last 20 years. The major species sown in 1999 were: Picea mariana (35%), Picea glauca (22%), Pinus contorta (13%), and Pinus banksiana (12%). For Canada as a whole, 25% of the seed came from seed orchards, but for the Maritime Provinces, Quebec, and Manitoba this percentage ranged from 60 to 90%. Orchard production is still growing: British Columbia and Quebec will produce 80% of their planting stock from it during the next decade, and New Brunswick and British Columbia are already harvesting seed from second-generation orchards. It is expected that the high quality of seed obtained from seed orchards will contribute significantly to the efficiency of the reforestation program and increase the value of future forests."

This review uses data from a 1999 seed survey of seed collection and use. It includes forest depletion, regeneration and seed supply in Canada for 1960-99. Due to increased harvesting, there has been a increase in stock depletion of timber-productive land. Fires also increased the depleted areas. Natural regeneration occurs in the depleted areas, and artificial regeneration through seeding and planting increased dramatically between 1965 and 1990. The seed supply improved greatly because of improvements to trees and seed orchards. The seed survey includes 36 conifers and 29 broadleaf species. The amount of land that regenerated naturally and artificially were similar between 1995 and 1999. The seed treatment and sowing methods improved, making seedling production more efficient over a 20-year period. The review examines the differences key tree species across Canada. 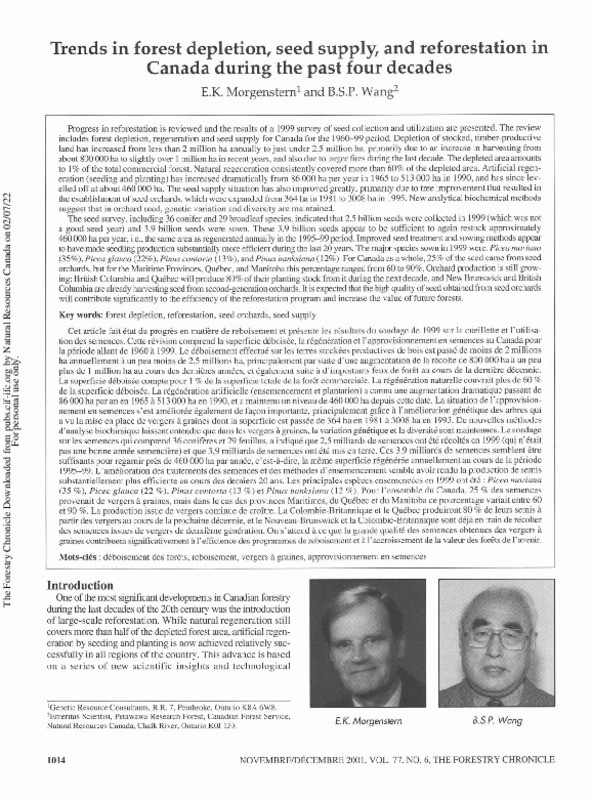