Understanding changes in salmonid populations and their habitat is a critical issue given changing climate, their importance as a keystone species, and their cultural significance. Terrain features such as slope, gradient, and morphology, as well as forest structure attributes including canopy cover, height, and presence of on ground coarse wood, all influence the quality and quantity of salmonid habitat in forested ecosystems. The increasing availability of Airborne Laser Scanning (ALS) data for forest applications offers an opportunity to utilize these data for assessing the quality and quantity of habitat, which is often costly and difficult to characterize. ALS data provides detailed and accurate Digital Elevation Models (DEMs) under forest canopies, which in turn enable the characterization of detailed stream networks, as well as stream and terrain attributes important to salmonids. At the Nahmint watershed on Vancouver Island, British Columbia, Canada, we sampled six, 200 m long stream reaches, describing a range of terrain and stream features following standard data collection protocols. Our objective in this research was to use ALS data to estimate three attributes from the 3D point cloud and DEM that are known to be important for salmonids, including bankfull width,instream wood and discrete stream morphological units. Results indicate that ALS-based estimates had strong, significant, correlations with fieldmeasured attributes (with Pearson’s correlation of 0.80 and 0.81 for bankfull width and instream wood, respectively). Bankfull width was slightly underestimated using the ALS data (Bias = 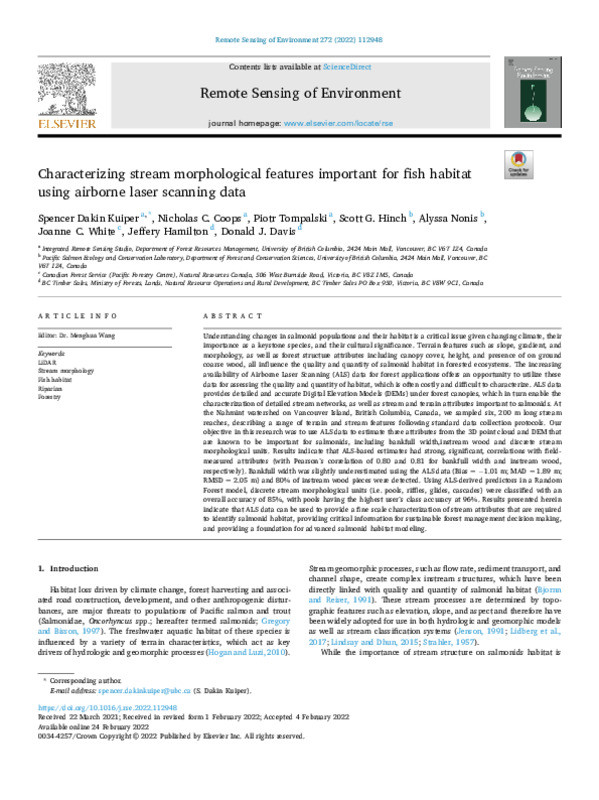