Invasions of exotic forest insects and pathogens can devastate evolutionarily naïve habitats and could cause irreversible changes to urban and natural ecosystems. Given the ever-increasing volume of trade in wood and plant stock worldwide, establishment of non-native pests under climate change is one of the most important forest health concerns currently. The European spruce bark beetle, Ips typographus, is a damaging, phloem-feeding insect of Norway spruce, Picea abies, in Eurasia. Endoconidiophora polonica is the most virulent ophiostomatoid fungal associate of I. typographus. Spruce species native to North America are susceptible to this insect-pathogen complex. We studied the suitability of ‘current’ (1970–2000) and future climates (2021–2100) in Canada and the United States for these two species via ensemble species distribution models. We also determined overlapping regions favorable to both I. typographus and E. polonica. Our results indicate that, currently, climate is particularly suitable for I. typographus and E. polonica in western Canada and throughout the United States. Northward shifts in climatic suitability are projected to occur in Canada for both species under climate change. By the end of the 21st century, a coast-to-coast corridor of climatic suitability for I. typographus and E. polonica will occur in Canada under high-temperature regimes. 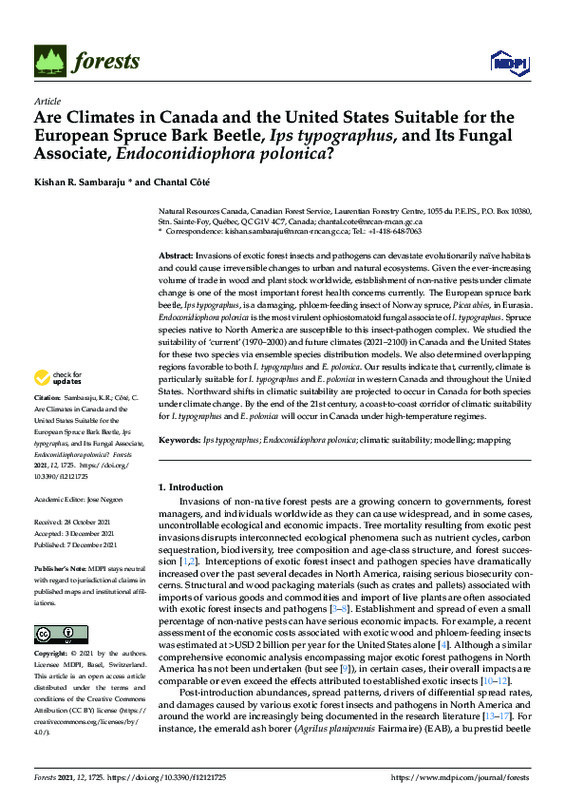